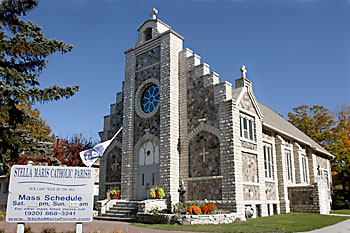 Stella Maris Parish in Egg Harbor will celebrate the 100th anniversary of its landmark stone church on Oct. 24. Bishop David Ricken will preside at the centennial Mass. (Rick Evans | For The Compass)

The land was donated by Charles and Delia La Rouche. Charles also made the original pews and altar. Total building cost in 1910 was $1,679.42, including “mason work for 104 cord of stone, $75 for the mason and $150 for ‘getting out and hauling stone'” according to diocesan archives. (A cord of stone measures four by four by eight feet.)

When the rectory was built next door in 1913, it was designed to match the stone church.

This is the third church building for the Catholic community in Egg Harbor. The first two were built near the site of St. John Cemetery, two miles south of the village on Hillside Road and Hwy. 42.

The first log church was built in 1878 by settlers who were Irish and French Canadian. Ten years later, a frame church — built from lumber from nearby Plum Bottom — was constructed. That building was later sold to Charles La Rouche, who had it moved to the village where it was used as a grocery store.