“We’re trying to make the Gospel, the church, alive,” explained Jesus Martin, the parish’s Hispanic representative on the pastoral council. “We’ve got to wake up a little bit. Sometimes, the problem is that, when people receive the sacraments, they don’t come back. So we’re trying to motivate people to do something different, to have them come back and keep going to church, and to get involved.” 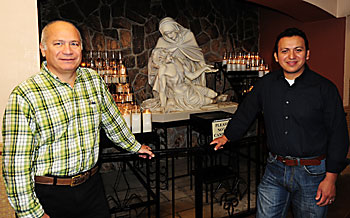 The day will be modeled after a National Hispanic Ministry Congress held in September in Chicago. Martin was among the 20 people from the Green Bay Diocese who attended the Raices y Alas (Roots and Wings) event. Carlos Hernandez, Hispanic Ministry director for the Diocese of Green Bay, also attended through a Catholics Come Home grant.

Martin said the Nov. 13 event will follow the same model as the Chicago meeting and cover the same topics:

• Diversity in the church;

Martin said that, at the Chicago congress, he was especially drawn to the workshop dealing with youth.

The St. Willebrord workshop is being offered to first Communion parents, confirmation candidates and their sponsors and all those in the RCIA (Rite of Christian Initiation for Adults) program.

Martin also hopes to focus on diversity issues, especially as they affect the local relationship between Anglos and Hispanics, but also the Hmong community.

“Especially today, with the economy and the things going on around the world,” Martin said, “we have to work together. We’ve got to find a way. It’s not going to be easy, but if we don’t start, we won’t get to the goal line. We should not be afraid, but sometimes our problem is that we’re afraid to talk and try to do something.”