More than 9,000 students from 61 diocesan schools and 16 counties took part in the first ever all-schools Mass on Oct. 14. The celebration, sponsored by the Diocesan Association of School Administrators (DASA), is the largest attended Mass in the history of the diocese, said Dr. Joseph Bound, diocesan director of education. 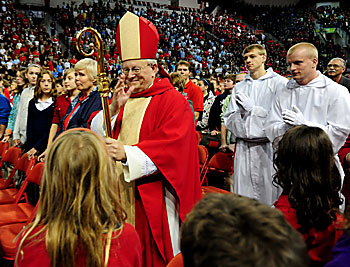 Bishop David Ricken waves to Catholic school students as he enters the Resch Center for the all-school Mass Oct. 14. (Sam Lucero | The Compass)

Schueller and association secretary Pamela Otto, principal at Holy Family School, Green Bay, welcomed the schools with a roll call. Students cheered loudly when their school name was announced. Principals and student representatives then carried school banners in a procession, which brought more cheers from the respective students. The banners were displayed near the arena’s balcony seating with the assistance of the Notre Dame Academy, Green Bay, cross-country teams.

Bishop Emeritus Robert Banks, Auxiliary Bishop Robert Morneau, more than 50 priests and many deacons joined Bishop Ricken for what he described as “a Mass in celebration of Catholic schools, a Mass of solidarity.”

“This has been a dream in many people’s heads for many years,” said the bishop in his homily. “Today, the Resch Center is transformed much like a cathedral, a cathedral in physical beauty, a cathedral built in living stones. This is a beautiful sign of God’s love for us.”

Bishop Ricken spoke about Jesus the teacher and the importance of creating a “Christ-centered atmosphere for learning and a welcoming environment” in the Catholic schools. He emphasized that the core values of Catholic education are alive today in the schools, including self-discipline, virtue and motivation. A message about vocations was also presented to the young people.

“Our Catholic schools are a time-tested source of vocations for the church,” said Bishop Ricken. “Open your minds and hearts to the power of the Holy Spirit.”

The bishop encouraged the students to pray for the grace that young women answer the call to religious life, that men will be called to the priesthood and for the embrace of married and family life. He asked the congregation to raise their hands if they say “yes to the call to the church in holiness.” He also asked for prayers.

“Pray in particular for your school,” said Bishop Ricken. “Pray for an increase in the number of students. Pray for the necessary financial resources. I ask that you commit yourself to prayers for your school and all the Catholic schools in the diocese.”

Bishop Ricken closed the homily with a blessing for the Catholic school principals, teachers and staff.

Bound encouraged those in attendance to remember that they were a part of history. He thanked by name individuals and organizations that helped make the celebration possible, especially the members of DASA.

“This organization had the vision for this end,” he said.

“It was just a little seed, a little idea that has grown into this beautiful event,” she said. “About two years ago, in April, we secured the Resch Center for this day. It was supported by the bishop and Joe Bound. The whole diocese got together to make this happen.”

The diocese traditionally celebrates a Catholic Schools Week Mass in late January or early February. Due to limited space, participating schools are only able to bring a few student representatives. Poor winter weather has also made attending the schools week Mass challenging at times.

“That’s why (the all-school Mass) started getting talked about,” said Schueller. “I think it was after a couple winters when we had to cancel or decide, ‘Do we have it or do we cancel?’ that some people started saying, ‘Why don’t we have something really big with all of us in the fall?’ I don’t think that 10 years ago, the Resch was even here (opened in 2002), so in that time frame this place became an option. … I believe that three years ago someone checked into the cost and we moved forward.”

Both Schueller and Otto said the excitement and energy of the students was the reward for all the hard work by the event’s organizers.

“I loved hearing the students cheering for their school,” said Otto, when asked about favorite moments. “To have representation from every school was great.”

Tommy Stueck, an eighth grader at Sacred Heart School in Shawano and student council president, said he was proud and a little nervous to carry his school’s banner. He praised the event.

“When I walked in, I thought, ‘Wow, this is huge, there are a lot of people,'” he said. “The music was really good. I liked that we got to sing the Our Father. I really wanted to see the bishop because I hadn’t seen him before.”

“I thought it was going to a really cool opportunity for all of us to gather and to just celebrate, listening to God and singing with each other,” said Lauren Schlies, an eighth grader at Holy Rosary School, Kewaunee. “It was really cool to see everyone from different schools participating in this Mass. It was awesome.”

Classmate Ali Gallenberger had been to the Resch Center for hockey games, and was eager to see how it was set up for the Mass.

“It was really amazing,” she said. “I’ve never seen so many priests together, which I thought was really cool and — I liked all the songs.”

The girls hope the students respond to Bishop Ricken’s call for prayers for the schools.

“That’s a really cool thing because our school is losing a lot of people,” said Gallenberger. “We need a strong school community.”

“That helped a lot because I think a lot of schools are struggling,” said Schlies.

Music during the Mass, under the direction of Dave Pufall of St. John the Baptist Parish in Howard, prompted rhythmic clapping by the congregation on several occasions. The students brought bag lunches to eat after Mass and a sing-a-long with the band Building Permit broke out to close the gathering. Otto hopes the first all-school Mass is not the last.

“I would like to see it happen again in the next five years,” she said. “Maybe in Appleton, Oshkosh or move it somewhere else in the diocese if we can find a big enough space. I’m thinking if the parents want to attend, we may have to do Lambeau Field, but we would have to see if that’s available to us. I know a lot of parents would have liked to have been here, but we didn’t have enough seats. We would love to make it available to everyone.”