Rosaries are his passion

Northway, a lifelong member of St. Francis Xavier Cathedral Parish in Green Bay, has been a rosary maker for the past six years. And he’s made a lot of rosaries, estimating the number at more than 7,000. 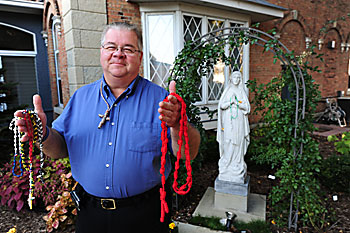 He makes all types of rosaries: from six-foot-long wall rosaries to single-decade wrist rosaries, as well as the more familiar five-decade rosaries. He’s made them from beads and wire, but mostly from nylon twine.

It’s actually nylon fishing twine. When asked why he uses fishing line, he answers, “Who were Jesus’ first disciples?”

A broadcast technician by trade at Relevant Radio, Northway came to be a rosary maker because the radio station had posted an ad for a local construction company that was looking for someone to make 300 blue and white beaded rosaries. Northway, who had never made a rosary at that point, decided he wanted to try.

“They aren’t that difficult to make. I read up online a little,” he said. “Then I made my tools myself.”

While many people make the rosary by tying the knots around their fingers, Northway devised a tool that makes more evenly sized knots and also saves wear and tear on his fingers: He uses the barrel of a stick pen, with a slice taken out of the side to allow a hook to pass through and loop a knot. For the larger rosaries, Northway uses a split hose from an air compressor.

He’s made rosaries for various groups, including 200 rosaries for his parish’s dedication of their Mary Garden in 2008. He’s made Packer rosaries — with green and gold twine — for Bishops Robert Banks, David Zubik, Robert Morneau and David Ricken, as well as for his pastors at the cathedral.

His most unusual rosary is a set he made recently at the request of a couple in Illinois. Their daughter was professing vows in a religious community in Pennsylvania and one thing she was allowed to receive from her family was a rosary to wear. But it had to be black — a color Northway had not used to that point, and a color harder to locate in fishing twine. But he did and, with the same twine, he also made wrist rosaries for her mother and father.

He has also made a wall rosary for Bennet’s godparents. For his next project, he’d like to learn how to make a wedding rosary, a tradition in Latino countries where two five-decade rosaries have their loops joined together with a single pendant so they can be placed over the bride and groom’s heads at the marriage ceremony.

Northway’s rosaries usually have a twine cross knotted at the end, but he has also used traditional metal crucifixes — as he did for the nun in Pennsylvania. He uses the knotted cross for travelers, prisoners and military personnel.

“I find people prefer to have the twine crucifix if they do any traveling. Airplanes won’t allow metal,” he said. “Also, military personnel like them because they don’t make any noise in their pockets.”

Northway began making rosaries for those in prisons because of the request of a friend who makes prison visits.

“I normally do one-decade rosaries (that fit on the wrist) for them,” Northway said. “Not so often the five decade rosary; I wouldn’t want to be the one who made the rosary they used to hang themselves.”

Northway, the youngest of six boys, grew up saying the rosary with his family.
“My family would gather for the rosary every night during rosary month (October), and for at least weekly during the rest of the year,” he said. “We’d kneel around the living room and say it.”
Today, as he makes his rosaries, he prays the prayers of the beads.
“Every rosary I make has been prayed over,” he said. “A lot.”
He’s given many rosaries away — “the cause has to be right” — but he does sell others, charging at least enough to cover the cost of supplies. His work can be found at St. Catherine’s Book Shop, near the cathedral, and will be part of his parish’s upcoming fall festival on Nov. 13. Word of mouth has carried his rosaries as far away as California, New Mexico and Florida.
A few years ago, he thought that carpal tunnel syndrome might slow or end his rosary making days, but the opposite actually took place.
“I told the doctor (about making rosaries) and showed him how I do the rosary making, and he said that it might actually be good therapy,” Northway said. “So I continued on and it really helps. It keeps me limber.”
Every rosary he sends out includes the suggestion to have the rosary blessed by a priest or a deacon, and to “pray the rosary.”
“I used to add ‘daily,”’ Northway said, “but there are people out there who might want to pray it more than once a day.”
After all, he does.