“Since the beginning of the school year, the teachers have been teaching students about the history of the chapel,” said Jensen. Students also viewed a 30-minute documentary of the shrine produced and directed by Ashley Cross. 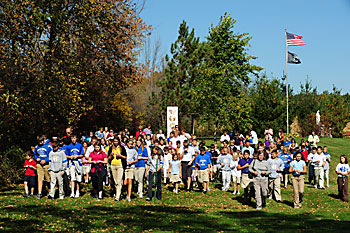 Students from Holy Cross School in Bay Settlement recite the rosary while walking along the Shrine of Our Lady of Good Help grounds in Robinsonville Oct. 8. (Sam Lucero | The Compass)

“There’s a lot of history and connections to Holy Cross and we’re just really learning about that now,” said Jensen. “A lot of parish families have ancestors who were very involved” at the shrine and the school that once existed there. In addition, she said, Sisters of St. Francis of the Holy Cross, who have historic ties with Holy Cross School, also spent many years teaching students at the shrine.

During their field trip to the shrine, students attended Mass celebrated by Norbertine Fr. Tom Hagendorf, pastor of Holy Cross Parish. Each class took turns visiting the chapel’s basement crypt. It was in this spot on Oct. 9, 1859, where Adele Brice reported that the Virgin Mary appeared to her, telling her to gather children in the area and give them religious instruction.

Cross, the producer and director of the shrine documentary, was on hand to talk to students about the shrine as they visited and prayed at the crypt.

In his homily, Fr. Hagendorf told the students that the Virgin Mary is their spiritual mother. 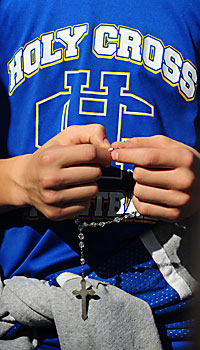 A student from Holy Cross School in Bay Settlement prays the rosary during a visit to the Shrine of Our Lady of Good Help in Robinsonville Oct. 8. (Sam Lucero | The Compass)

“When Jesus was dying on the cross, he gave St. John — and through St. John to all of us — a wonderful gift. He gave us the gift of his mother, Mary. She is our heavenly mother. … She cares for each and every one of us, just as much as your natural mother cares for you.”

Following an outdoor lunch, the students concluded their day with a rosary procession.

“It just so happened we chose this week in August. We didn’t know these anniversaries were this week,” said Jensen. “It’s just a real beautiful time for us to come and I think it will become an annual thing for our school to come out here to pray.”

The school’s visit to the shrine kicked off a busy weekend in Robinsonville. That evening, a rosary procession and benediction of the Blessed Sacrament was led by Fr. John Doerfler, the shrine’s rector. Adoration, which began Friday night, continued Saturday, followed by closing benediction and 5 p.m. Mass celebrated by Bishop Ricken.