“A life of faithful service is not only possible, but satisfying,” he said. “As you fall prostrate upon the floor of this basilica, give yourselves over completely to Christ and his church.” 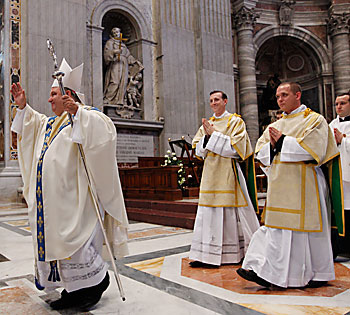 As part of the ordination rite, Bishop Hebda placed the Book of the Gospels in the hands of each man being ordained and said, “Receive the Gospel of Christ, whose herald you have become. Believe what you read, teach what you believe and practice what you teach.”

The new deacons will have an additional year of formation before being ordained to the priesthood.

“As a deacon I will be able to preach, baptize and witness Christian marriage,” said Deacon Brunner in an e-mail interview with The Compass. “In Rome, I will not have many opportunities for baptisms, but I will have opportunities to preach. This will be great preparation for the priesthood. I hope that it chisels me into being a great preacher. The people of the Diocese of Green Bay have a right to hear good preaching.”

Deacon Brunner, of St. Thomas the Apostle Parish in Newton, said the call to the priesthood is a great reward.

“During the journey, I have become a better Catholic,” he said. “This process has been one of growth, and just like any growth there is both fertilizing to encourage a lush spiritual life, but also pruning. The pruning of my heart has required deep and honest self-reflection. I ask God, ‘Where am I not living up to what Christ is calling me to as a man, as a Christian and soon as his minister?’ I then ask him to help me grow in those areas.”

Deacon Brunner lists his parents, Bill and Rosemary Brunner, as influences in helping him uncover and discern his vocation.

“The first teachers of the faith are the family and my parents always made sure that I was at Mass on Sunday and was educated in the faith,” he said. “I was also fortunate to meet a number of good priests during my time at St. Norbert College, including Fr. Tim Shillcox. What has tied me to ministry with the diocese has been the gift of Catholic Youth Expeditions. There, I have met companions on the journey and been opened to the Spirit.”

Deacon Brunner began his seminary formation for the priesthood at the University of St. Mary of the Lake Mundelein Seminary in Illinois. When he first applied for seminary, Bishop David Zubik offered him the chance to study in Rome. Deacon Brunner cherishes the experience.

“Rome is the center of the Catholic world and has been since the time of Peter,” he said. “Each day I walk the same streets that the early martyrs walked, and I have ample opportunity to pray at the tombs of the saints. This is what makes Rome a true gift to priestly formation. The academics and formation are the same as in the United States. The difference is the city of Rome herself, which has become my second classroom.”

Deacon Brunner lists Santa Maria in Trastevere and the Pantheon as his favorite spots in Rome. He added that he misses the people of Wisconsin.

“The Romans are very friendly and I have had the opportunity to meet people from all over the world, but no one fills the place of your family and neighbors,” he said. “Returning home to be a priest for the people of Green Bay is what I look forward to the most.”

Deacon Brunner’s parents made the trip to Italy for the ordination as did Fr. Quinn Mann, associate vocation director for the diocese, who vested him at the Mass.

“I am very happy that my parents were able to make it,” said Deacon Brunner. “I know that they had to sacrifice in order to come, but it has been a joy to have them here. It has been really great to see them in Rome when I thought they would never make it. Having them here has provided a way that I can draw a connection between my (future) life as a priest and my life as a member of their family. Fr. Quinn has been very important in helping me discern a call to the priesthood, so I could think of no better choice to place the vestments of the deacon on me during the ordination.”

Taking another step on his journey to the priesthood, Deacon Brunner said he has thought about serving in the diocese. This past summer, he was often asked about the type of parish he would like for his first appointment.

“Over the past few years, I think I have crossed the path of most parishes and for me, each one would be a gift and privilege to serve,” he said. “I am just so happy to have been called, and I know that I can follow this call because of all the support and prayers that the people of the diocese have provided. They are all in my prayers and I am grateful that they have made it possible for me to follow (God’s) voice.”