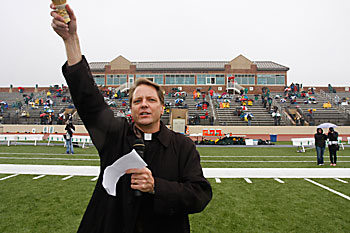 “In 2003, architects came in to do an assessment of our facilities and said, ‘You have to do something, it’s not ADA (Americans with Disabilities Act) compliant. It’s not fan friendly, it’s not student friendly, it’s not safe, it’s antiquated, you’re spending more money on it every year than you should.’ It was clear that we needed something new,” said Maslinski.

A decision needed to be made whether to tear down Minahan and build a new stadium in that area or move to a new site. The latter, land south of campus on De Pere’s west side, was the best option for two reasons: its proximity to campus and the size of the property, said Maslinski.

Minahan is located on 11 acres on the grounds of St. Norbert Abbey. The Schneider Stadium property is 26 acres of which 23 have been developed. The remaining three acres are wetland.

St. Norbert College required that funding be secured before starting construction on the $12 million facility. Don Schneider, the namesake of the complex, is a 1957 St. Norbert graduate. He is the retired CEO of Schneider National, a former member of the college’s board of trustees and a former adjunct professor at the college. Don and Patricia Schneider were the major donors for the project. The stadium’s plaza is named after Fred and Carol Wakeman, the second lead donors. Fred is a 1950 graduate of St. Norbert College and a retired executive from Green Bay Packaging.

Maslinski said that the college was able to sell $250,000 in advertising in support of the stadium. The playing field is named in honor of Howard “Chick” Kolstad, St. Norbert football coach from 1960 to 1978.

“There was a campaign within a campaign,” said Maslinski. “Howard’s former players, friends and family raised enough money to put his name on it.”

Schneider Stadium has 2,454 seats and standing room fan space. The press box has 34 spaces for journalists, coaches and game staff. The current parking lot has capacity for 500 cars.

“We are probably a little shy on parking at this time,” said Maslinski. “Minahan has a lot of parking, but it’s gravel. You needed a car wash after the game.”

An additional 1,000 seats are planned for the west side of the stadium opposite the grandstand. More seating will require more parking and restroom facilities. According to Maslinski, in order to stay within the desired timeframe to complete the project, the additional seats were put on hold for a later date. Miron Construction was the general contractor for the project. Rettler Corporation landscaped the complex grounds.

“Construction started last fall,” said Maslinski. “We were the beneficiaries of a good winter and the victims of an awful summer in terms of rain.”

The field turf is from Shaw Sportexe, the same company that installed the playing surface at Ted Fritsch Field at Notre Dame Academy in Green Bay in 2009.

“There are varying levels of quality for field turf,” said Maslinski. “We bought the upper echelon stuff because in fairness to your donors, you don’t want to be buying something that doesn’t have longevity and you’re back asking for more money. That doesn’t fly very well. The surface is low maintenance. You never line it, you don’t water, you don’t cut, you don’t fertilize. You have to groom it twice a year and that’s only an hour process.”

The new stadium will serve as the home of St. Norbert soccer and track and field in addition to football. Men’s and women’s track and field are the greatest beneficiaries of the new facility, said Maslinski.

“That said, we’ve had four or five (track and field) national champions in the last decade,” he added. “They’ve practiced at a local high school, on the streets and indoors. To go from no facility to a state of the art facility is incredible.”

The stadium scoreboard will serve as a result board during the track and field season. The new track is a polyurethane surface built on top of asphalt with a layer of rubber in between.

“It’s a fast, fast surface,” said Maslinski. “It’s runner friendly. There won’t be a lot of shin splints. We have all the field event areas. It’s got everything.”

The men’s and women’s track teams had 51 participants combined last season. This year, the programs have 91 student athletes. Ten graduated last spring, so there are 50 freshmen.

“I don’t know if our facilities will bring in more kids, but I know it won’t chase any away,” said Maslinski. “I know kids who didn’t come here because of the facilities.”

Minahan, which was once a polo field, remained untouched this fall as a backup facility. The soccer field alongside the stadium was still used by St. Norbert. Once the college ceases to use it for athletic facilities, the property will be returned to its natural state, said Maslinski.

“The Norbertines have always had control, they’ve just lent it to us for over 70 years,” he said. “It’s not like we’re giving it back to them. We’ve never had it. We’ve just had it to use.”

The lights and grandstand at Minahan will be taken down. The amount of recycled steel will likely pay for the deconstruction, said Maslinski. The Norbertine heritage was integrated into the new stadium including fleurs-de-lis in the design and a prayer labyrinth.

Completion of the locker rooms at Schneider is targeted for April 1. Other than adjusting the lights for soccer, operations at the new stadium have gone smoothly, said Maslinski, a St. Norbert alum and the college’s athletic director from 1998 to 2004.

“(The new stadium) means a lot to me because it means a lot to our kids,” he said. “When you’re a tuition driven institution, you have to make sure your enrollment is healthy. In a day when many high schools have nice facilities, you don’t need to have a second rate operation. Whether it’s a new library, dormitories or stadium, you need to keep your facilities updated otherwise you’re going to lose out. We want to attract and retain the very best that we can get, academically first and athletically second.”

The boost in football attendance has been rewarding, added Maslinski who serves as an assistant coach on Jim Putill’s staff.

“I’ve never seen more students at the games in the 12 or 13 years I’ve been here,” he said. “They are excited about it. It’s closer, the scoreboard is great, the whole environment is much improved.”