“Catholic education provides a faith-based, nurturing environment,” he added, “in which our students are challenged academically and prepared to become good citizens and leaders who are grounded in our Catholic faith, morality and ethics. I congratulate Xavier for being recognized in these areas and forming our young people in the Catholic faith and giving them a solid foundation for the rest of their lives.” 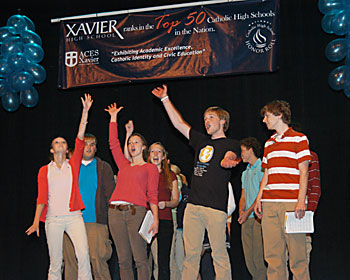 Xavier High School students display a banner during an assembly Oct. 15 that indicates the Catholic school’s latest recognition: Selection by the Acton Institute as one of the top 50 Catholic high schools in the United States. (Dick Meyer | For The Compass)

ACES Xavier President Deacon Tony Abts made the announcement to students at an Oct. 15 assembly at the school. There were also presentations by Xavier alumni, some who were present and others who sent video and written statements. They included:

• Mee Moua, a 1988 graduate, a Minnesota state senator and the first Hmong state office holder in the country.

• Four-time Super Bowl champion Rocky Bleier, class of 1964, a former Pittsburgh Steelers running back and a Purple Heart and Bronze Star recipient for action while serving in the U.S. Army in Vietnam.

• Kip Whitlinger, a 1963 graduate who is the owner of Plastic Recycling Solutions in Neenah.

• Maureen Riopelle, who runs her own foundation and camp for women with cancer in Ohio and a 1980 graduate.

• JP Hayes, a professional golfer, a 1983 graduate who continues to compete on the PGA tour.

• Fr. Tom Long, Vicar for Ministers for the Diocese of Green Bay, who is a 1983 alumnus.

• Mindy Rueden, executive director of the Brother David Darst Center in Chicago, which provides urban immersion experiences in social justice. Rueden is a 1996 graduate of Xavier.

• Kale Bongers, a student in the Medical Scientist Training Program at the University of Iowa. He graduated from Xavier in 2003.

• Sopen Shah, a 2004 graduate of Xavier, attended Harvard University, and was a presidential scholar and Wisconsin Junior Miss 2004. She earned the title of Miss District of Columbia first runner-up 2010 and now works as a government consultant in Washington D.C.

Xavier is one of two schools in Wisconsin to be recognized by the 2010 Catholic High School Honor Roll. The other school is Catholic Memorial High School in Waukesha. All 1,300 Catholic high schools in the country were invited to apply for the Honor Roll. Xavier’s average ACT score for the class of 2010, released earlier this year, is 26.0, ranking highest among all public and private high schools in the Fox Valley. In the diocese’s 16-county area there are six Catholic high schools with 2,100 students. Another 10,500 students are enrolled in Catholic elementary schools.

“The Xavier community is very proud to be recognized as one of the top 50 Catholic high schools in the country for the third time,” said Xavier principal Matt Reynebeau. “The Acton Institute recognizes us for academic excellence, Catholic identity and civic education. We credit our success to not only our students and their families but also to our dedicated and talented teachers, our partner elementary and middle school teachers, the parish support we receive, and to our many alumni, supporters and benefactors. This award is shared by the entire Xavier community.”