Every year, The Compass asks children, in fifth grade and under, to participate in our “Just for Kids” essay project. Individual children, as well as students in schools and religious education programs, send in essays. Their perspectives add to our celebration of Christ’s birth. 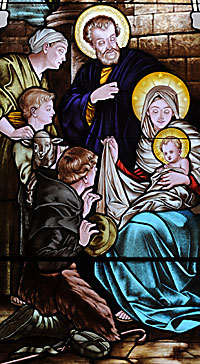 This year, the paper asks children about saints and Jesus’ birth:

“What saint would you have sent to Bethlehem?”

The Gospels tell us that many people were at the stable in Bethlehem when Jesus was born. But many other people who later became saints weren’t there. Many weren’t even born yet.

Imagine one of your favorite saints going to Bethlehem. Who would it be? What would he or she say or do? (It can’t be Mary or Joseph or the Wise Men or angels or anyone else who really was at Bethlehem, according to the Gospels.)

Due to space limitations, children are asked to keep essays under 40 words. And if essays can be sent by e-mail, it would be greatly appreciated.

All entries should include the child’s name, address, age, school, parish and grade in school. (Class submissions must also include the teacher’s name and class, since we often receive several entries from one school.) Children may include artwork as illustration.

Send e-mail entries to [email protected]. Essays will be posted on The Compass Web site during the holiday season. Entrants will also receive a prize after the New Year.