The doubles championship broke a string of runner-up finishes for the Lady Tritons. A year ago, seniors Karie Williams and Mary Catherine Faller were defeated in the championship match by Elissa Halla and Natalie Foster of Roncalli (Manitowoc). In 2008, Pott and Faller finished second to Halla and Foster. 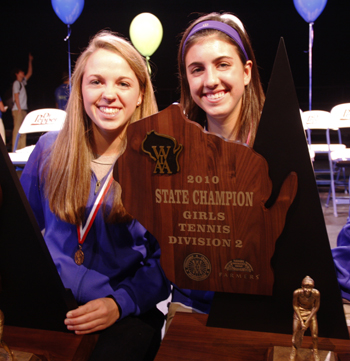 “Our coach was always saying, ‘Second place is great, but we would love to have a first place team,’” said Schaupp. “It kind of became real towards the end of the season as we sized up our competition and realized that it was actually a possibility. Coming into the season, I don’t know if we thought we could win state.”

“We always really wanted to win it,’” said Pott, “but I felt that we had to get stronger over the course of the season to do it.”

Pott and Schaupp entered the state doubles tournament as the top seed.

“I’m not really good with pressure, so I try not to look at who we are going to play and their record,” said Pott. “I just like to go out there and play. We have our game, so let’s play our game.”

“We just tried to focus on the present,” said Schaupp.

Pott played doubles all four years in high school. Schaupp competed in singles her first two seasons, but made the switch due to injury.

“In my junior year, I had tendonitis in my shoulder,” said Schaupp. “My doctor said it would be better for me to play doubles because it’s less serving and you’re not hitting as much with another person out there.”

An opportunity to play with Pott opened up and the pairing worked.

“Our tennis games are pretty similar,” said Schaupp. “We are pretty compatible. Our attitudes on the court are similar, so we work well together.”

“We know how to get each other pumped up and help each other on the court,” said Pott.

Both girls credit Lagerman for helping them achieve success.

“He always keeps us calm and makes us happy,” said Pott.

“He gets it right,” said Schaupp. “There has never really been a time where he hasn’t done the right thing. We are really grateful to have such a nice coach who really cares about us.”

The celebration of the doubles title was short-lived as the duo had to prepare for team state.

“We had practice as usual,” said Schaupp. “We were excited about it. I don’t think we lost any energy.”

Notre Dame faced its toughest test at state in the semifinals against University School of Milwaukee. The Lady Tritons had defeated University School in the title match the previous two seasons and fell to the Wildcats in the semis in 2007. Notre Dame edged its rival 4-3 to advance to the 2010 championship match.

The finals victory at team state was bittersweet, said Schaupp. The five seniors in the lineup — Pott, Schaupp, Maria Koval, Samantha Pallini and Katie Schick — were all members of the previous championship teams, played at team state as freshmen and competed together in youth tennis.

“There was some crying going on,” she said. “There were tears of happiness. We were all excited that we won, but it was kind of hard. The whole team will probably never play together again.”

Nicole and Catherine competed as a doubles team and won both their matches at team state.

“Competing against siblings is never the easiest thing,” said Christina. “We loved having our sisters on the team. It’s been nice for our parents. They’ve become close.”

Christina is considering playing tennis at Lawrence University in Appleton next year. Katie is leaning towards the University of Minnesota. They plan to play together in summer leagues. Looking back on their high school careers, both girls said they couldn’t have asked for anything more.

“I would have never imagined this,” said Katie. “There are so many good players out there, so I just never expected this.”

“If someone would have told me freshman year that we would win three state titles and a doubles championship, I would never have believed them,” said Christina.

So which title is more special, team or the doubles championship?

“Team state seems more exciting because everyone is cheering and it’s so loud,” said Katie. “It’s a team effort to win it.”

“They are different, but both exciting,” said Christina. “We’re very lucky to have been given this opportunity.”