According to Bob, the idea for Patrick’s Patches came about when he was working at Brillion High School and noticed a student who had more duct tape on his shoes than shoe and was wearing shorts to school in the winter long before wearing shorts year-round was cool. 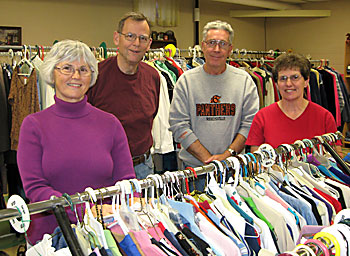 Mary Jo and Bob Campana, left, and Jerry and Judy Reis, members of Holy Family Parish in Brillion, started Patrick’s Patches in Reedsville. The store provides free clothing and other items to people in need. (By Amanda Lauer | For The Compass)

That young man’s plight was discussed at Bob’s parish during a Cursillo retreat. “It was hard to believe that there was such need in such a small community,” recalled Mary Jo. Initially a space in the former St. Patrick Church in Maple Grove was set aside for their newly formed mission. Several years ago they moved to their present location at Holy Family School in Reedsville.

When Patrick’s Patches was formed, there was discussion amongst the volunteers about charging clients but that idea was dismissed. “When we read the Gospel, Jesus said feed the hungry and clothe the naked. He didn’t say charge for it,” said Bob.

As their facilities expanded the group was able to take on more donations than just clothing. They now have several rooms available for their use. The all-purpose room contains clothing that is off-season but also was used recently for their winter coat give-away, where 158 jackets were handed out. Hand-knit scarves, hats and mittens that a parishioner creates using donated yarn are located there as well. The room is used extensively during the holidays.

“At Christmastime, kids love getting toys because some kids don’t get anything,” said Jerry. “We have puzzles, toys, books, stuffed animals.” They also give away Christmas decorations.

The next room holds men’s clothing and boys’ and girls’ clothing, sizes 7 to 18. They are always looking for more clothes for men. “We don’t get as much men’s clothing donated,” explained Bob. “Men wear clothes until they’re threadbare.”

The old cafeteria in the building has been turned into a laundry room. At times the volunteers need to wash, iron or mend items. The final room holds clothing for women and younger children. Throughout the various rooms and hallways miscellaneous items are displayed, ranging from home furnishings to sports equipment and just about everything else in between.

No donated item is wasted. “If it’s good it gets used. We do a lot of recycling here,” said Judy, adding that many items are sent to Goodwill. They took donated Bibles and delivered them to St. Francis of Assisi Parish in Manitowoc, where a deacon will use them for jail ministry. Other items have been sent to homeless shelters, a veterans’ home and Indian reservations.

Other area churches have taken on Patrick’s Patches as one of their missions as well. “Last year during Lent, they had a community service at each (church) and did a tithe from the collection and the money was donated to us,” said Bob.

Monetary donations are gratefully accepted at Patrick’s Patches. “The money is used to buy things we might not get, like socks, underwear or blankets,” said Judy. Both couples also check the clearance racks at department stores for clothes.

A portion of their proceeds goes to other Christian outreach programs such as the Christian Foundation for Children and Aging in Kansas City, Kan.

Many volunteers help out at Patrick’s Patches. Every week a group of women comes in to sort clothing and help with other tasks. Volunteers help clients shop on Sundays between 11 a.m. and 12:30 p.m.

“Sometimes by 11 in the morning we’ve got 100 people down here waiting,” said Bob. People from throughout northeast Wisconsin visit their establishment. “It is a family-oriented deal,” added Jerry. “Families take a plastic bag and they go shopping. They don’t have to worry about money.”

A Christmas giving tree is currently set up at Holy Family Parish. “We took information from those in need to make sure we had proper sizes for everybody. We put the tag on the tree and parishioners buy the item. We did that with school supplies this year too,” said Judy.

“Patrick’s Patches really changes people,” concluded Mary Jo. “It changes the people that come here because they see people that are willing to give — not just us that work here, it’s all the people that donate from our parishes and from the community.”