Ecumenical Center is renamed after priest

“There were thousands of people” who helped make the Ecumenical Center a success, he said in an interview with The Compass Nov. 4. “This was not a one-man show. It took the generosity of many people and a lot of time.” 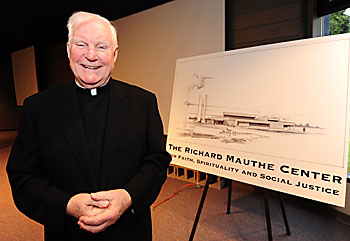 Fr. Richard Mauthe stands next to a sign that was unveiled Oct. 30 showing the new name of the Ecumenical Center located on the UW-Green Bay campus. Fr. Mauthe served as Newman Center chaplain from 1961 to 1992 and helped found the Ecumenical Center. (Sam Lucero | The Compass)

A ceremony announcing the Richard Mauthe Center for Faith, Spirituality and Social Justice was held Tuesday, Nov. 2. It coincided with the monthly lecture series hosted by the priest, “Tuesdays with Mauthe.”

“He represents the spirit of ecumenism,” said Hung Nguyen, director of the center since 2009. “The (center’s) mission has not changed since Father’s time. We put the students front and center to develop their faith life.”

The name change is a lasting tribute to the spiritual leader who helped introduce ecumenism in the city, said Nguyen.

In September 1961, three years after his ordination, Fr. Mauthe was appointed by Bishop Stanislaus Bona as chaplain of the Newman Club at UW-Green Bay, at the time an extension of the UW system. Newman Clubs, named after Cardinal John Henry Newman, are Catholic ministry centers at non-Catholic universities that date back to the late 1880s. According to Fr. Mauthe, soon after his appointment, he began contacting Protestant clergy to see if there was interest in interfaith activities. “They said no. They didn’t want to touch anything that had Catholics in it,” he said.

By 1965, the ecumenical movement was blossoming thanks to the Second Vatican Council, Fr. Mauthe said. Other campus ministers were open to the idea of establishing an ecumenical center. “There were people in my own church who thought I lost my own faith,” he said. “There was some antagonism toward it. Ecumenism didn’t start out in any parish. It started out at the Newman Center.”

In 1967, he and other campus ministers agreed on a statement of purpose and signed a covenant, creating the Ecumenical Center. “We had to soften and tone down the language so it was acceptable to other denominations,” he said. “But by then, (divisions) began to melt.”

The churches started to have choir exchanges, followed by pulpit exchanges. “That was the beginning of the great ecumenical movement,” he said.

“Bishop Wycislo was terribly excited” about ecumenism, he said. Three days after his installation, Bishop Wycislo called Fr. Mauthe into his office to learn more about the Ecumenical Center. “He found nothing erroneous with it.”

For Fr. Mauthe, interfaith dialogue wasn’t a dry subject found in a textbook; it hit home. “My mother was Lutheran,” he said. Family discussions often focused on the traditions of Lutherans and Catholics.

Fr. Mauthe remained as Newman Center chaplain until 1991, when he was assigned to St. Louis Parish in Dyckesville. On Jan. 7, 1992, he was named the first recipient of the John Henry Cardinal Newman Award by the National Association of Diocesan Directors of Campus Ministry. UW-Green Bay’s Ecumenical Foundation also established a perpetual scholarship in his honor. He retired from active ministry in 1999.

Last November, Fr. Mauthe returned to the Ecumenical Center to host the monthly lecture series, “Tuesdays with Mauthe.” The evenings include dinner, conversation and guest speakers from different religious backgrounds.

Fr. Mauthe said the series has reinvigorated him. “It keeps me going. They (college students) are challenging,” he said. “They are not confrontational. It’s a whole different world they live in.”

Nguyen and his assistant, Adi Redzic, are happy that the center is paying tribute to the man who started campus ministry in Green Bay 40 years ago.

“We want to make sure the original purpose and mission (of the center) remains the same,” said Nguyen. “Our job is easy (thanks to) what we have inherited from the previous generation.”

To learn more about the Richard Mauthe Center, visit www.ecuwgb.org.