God, country and family define her

Her entire career had fulfilling, amazing moments, but it’s those early years in the midst of World War II that set the tone for a career spent serving others. A long-time member of St. Agnes Parish in Green Bay, she was born in New London. After graduating from New London High School, LaFave studied three years at the Holy Family Memorial School of Nursing. 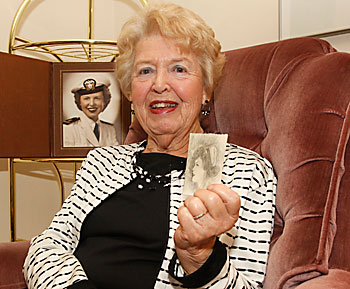 She still thinks about the young men from her hometown who lost their lives during World War II. “Every time I go home I stop at their grave,” she said.

“I wanted to go in,” LaFave said of her decision to join the U.S Navy Nurse Corp. “I thought it would be a good experience. I was great for doing new things.”

She served at the Great Lakes Naval Station in Illinois and it was here that seamen, U.S. Navy personnel and “fly boys” came after being transferred back from overseas. She cared for many young men who had served at battles in Iwo Jima and Okinawa. Once the servicemen came stateside into New York they were transferred by trainloads to different hospitals around the country. She remembers many had been shot in the legs. They would work in 24-hour shifts taking off old casts and putting new casts on, she remembered.

During the night shift she’d cover four wards. “I saw a lot,” she said.

“It was a rude awakening of what war was all about,” LaFave said.

“Sometimes they were there a long time, months and months, and some were there for years,” she said of the servicemen they treated.

LaFave told the story of her life as a U.S. Navy nurse in a written history for her 50th high school class reunion in 1990. Her rank was “ensign.”

“It is and was important for me to have meaning in my life, a goal for which to aspire,” she wrote. Of her experience at Great Lakes Naval Station she wrote, “I experienced choice making, taking risks and a tremendous insight regarding mental health.”

LaFave also served at the Naval Air Station in Corpus Christi, Texas. She was mustered out of the service in 1946. “I’m sorry in some ways I didn’t stay in longer,” she said.

She remembers having to be ingenious in her long days of work and reflects back on just what a young woman she was at the time going through such experiences. She was one of 12 children — one of her siblings is Fr. Richard Allen, pastor of St. Gabriel Parish in Neenah. She already had siblings serving their country in the war effort when she decided to enlist — something she said her family did not discourage.

LaFave remembers being quite vivacious as a young woman in high school — a trait that would serve her well as a Navy nurse. She was in the school plays, was a cheerleader and played the clarinet in the band. “I had a lot of fun,” she said.

Her Catholic faith also kept her strong. Not only did she attend daily Mass while a nursing student in Manitowoc, but did so when she could during her years in the service.

She remembers well the day Franklin Roosevelt declared war on Japan. Pearl Harbor in Hawaii had just been bombed. “Nobody expected that, and it was sad. It was very, very sad,” she said. She was at work as a nursing student at Holy Family Memorial Hospital when word came of the bombing and she was traveling home to New London when her father told her the news that war had been declared.

LaFave looks back on a rich life that brought her marriages to two wonderful men, Eugene, who passed away after 25 years of marriage, and Jack, who died in 2006. She has four sons, three stepchildren, eight grandchildren and one great-grandchild. She’s the kind of person who likes to look forward, always preparing for the future.

She hopes to one day take an Honor Flight to see the World War II Memorial in Washington, D.C. Her name is on the waiting list.

LaFave remembers her time in the service fondly and with great pride. “I don’t know if there was anything I could have done that I would have liked better,” she said.