“The goal of this group is to ‘evangelize youth through other youth,'” said Gabriela Parra, Jornadas de Vida Cristiana representative for the Green Bay Diocese. 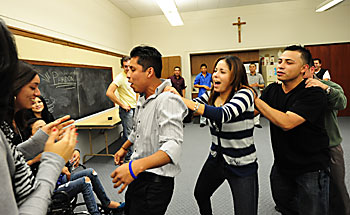 Edgar Martinez and Gabriela Parra lead Hispanic young adults in a social activity Oct. 30 in a meeting room at St. Philip Church in Green Bay. The young adults are part of Jornadas de Vida Cristiana, a Hispanic youth movement. Parra is one of the program coordinators. (Sam Lucero | The Compass)

According to Carlos Hernandez, Hispanic Ministry director for the diocese, Jornada Juvenil de Vida Cristiana is funded in part by the Bishop’s Appeal.

“Catholic Foundation for the Diocese of Green Bay has approved an (Advancing the Mission) endowment grant to The Journey of Youth in Christian Life to be used toward training programs for the Hispanic Christian Movement,” Hernandez said.

Currently, the Jornadas group has about 30 youth who have been through the retreat. According to Parra, to be part of the movement, participants must attend a four-day retreat, which will for the first time be held in the Green Bay area in July 2011. During the retreat, attendees get further in touch with their faith and gain tools to help guide them through the challenges of everyday life.

Each Sunday morning, these young adults attend what is called, Esculita de Auxiliaries, meaning the School of Auxiliaries, at St. Philip Church.

“During this time we learn the word of God and grow spiritually, as individuals and a group,” Parra said. “Since we will be the ones transmitting the word of God to other youth we need to go to school and learn.”

Youth that haven’t attended the retreat, but are still interested in being involved, are welcome to attend a youth group coordinated by the Jornadas movement at St. Philip every Saturday night 7 to 9 p.m. According to Parra, about 15 members are involved in the group. All youth 18 and older are welcome to attend.

“The reason we have two groups is because they (those who meet on Saturday) have not gone through the retreat, and we felt that we shouldn’t exclude them because they are our potential candidates who will be living the first retreat in Green Bay,” Parra said.

Parra became involved with the movement back in May 2009 after a college friend invited her to attend a retreat in Chicago.

“When we got out we were so amazed with the experience … and wanted to share it with young individuals like ourselves,” Parra said. “We saw that there was a need in Green Bay.” Young people want to get involved and want opportunities to demonstrate their love of God, she added.

According to Parra, the group met for the first time last October. Fr. Jose Antonio Castaneda, Parra Jose Ballesteros and Jose Lopez are the representatives of the Hispanic Jornada Movement in the Diocese of Green Bay.

“We started this because we saw that there was a need for young individuals, to get involved,” Parra said. “We saw the different problems occurring among our youth, and we knew that the word of God was the answer.”

The movement gives area youth a chance to grow and to have a place that helps them find out who they are.

“It gives us an opportunity through the word of God to try to figure out our mission on earth,” Parra said. “Most of the young people attending the groups are getting to know God for the first time. There are different chats that are given. We socialize, support each other and try to better our community.”

The group is currently putting together a Christian concert to raise funds for a July 2011 retreat. Other activities the group has participated in include donating toys to Freedom House and playing with the children there, as well as donating clothes to Goodwill.

It is Parra’s hope that the group continues to grow and more Hispanic youth are able to transmit the word of God to other youth.

“Many of us come from different backgrounds and have had different life experiences,” Parra said. “In reality we have completely different personalities. However, when you are in the group we leave all those differences aside and through God are united like a family. The group has come to be my second family.”