Naidl is thankful for gift of life

“I got to where I was in really bad shape,” Tom says. “And if that wasn’t bad enough, I got ulcers on my legs, which I will have the rest of my life.” Because of his diabetes, his legs do not heal well, he says. Tom uses a wheelchair because he doesn’t feel anything below his ankles. He rarely leaves his apartment. All of these health issues have also left him struggling with obesity. 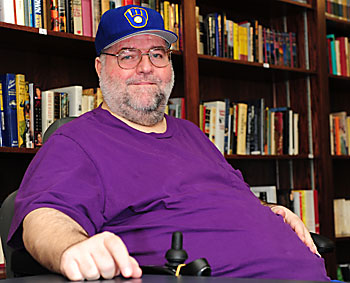 Tom Naidl is pictured in the library of his apartment complex in Manitowoc. Naidl, who must use a wheelchair due to a variety of health issues, is thankful for his family and for the services he receives that help him remain independent. (Sam Lucero | The Compass)

But rather than complain about his situation, Tom says that he has a lot for which to be thankful.

He receives medical care and personal assistance from Holy Family Memorial (HFM) Home Health Care. “I don’t know where I would be if I didn’t have home health care,” says Tom. HFM care enables Tom to stay in his apartment instead of having to move to an assisted care facility.

Nurses and assistants regularly visit Tom’s apartment, where they help him change the bandages on his legs and do some of the more challenging physical therapy in his regimen. “Once a week, a nurse will help me walk down the hall in the apartment building, so that has really helped me to maintain my weight,” says Tom, who has lost 40 pounds since beginning his therapy. “That’s really hard to do, when you’re not mobile,” he says.

Other HFM services that enable Tom to live at home include the homemaker services, where people come do the laundry, cleaning and shopping for Tom. He also has a Lifeline pendant, which gives him a button to push in case he has an emergency and no one else is around. “But the best part is the new telemed unit they gave me,” Tom says. The telemedicine unit enables Tom to monitor his weight, blood pressure, blood oxygen and more. Knowing his vital information motivates Tom to improve his health.

Tom says that the HFM services aren’t the only things he’s thankful for. He says he is blessed to live in an apartment complex.

“It seems like everyone’s always trying to give the Catholic Church a black eye,” says Tom. So he prays the rosary every morning and every night for the church, as well as for his immediate family.

“What I’m thankful for most — what really keeps me going — is my family,” says Tom. He keeps pictures of his family in strategic places around his apartment. “Sometimes I wake up in the morning and I don’t think that I want to go on. But when I roll out of bed and see the pictures of my family, I know that I have a reason to be alive.

“Overall, I’m just thankful for the life that I have lived, and the help that I have had in recent years,” says Tom.