Parish is her home away from home

Her father, Bert Pozea, moved the family from Chicago to Aurora when Weber was 7. She is proud to say her father was one of the people who helped build Sacred Heart Church beginning in 1923. The work was completed in 1926. 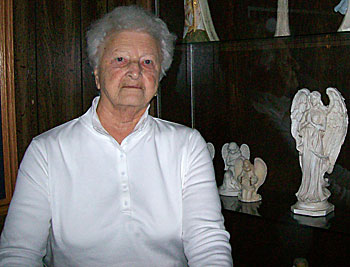 Dee and her late husband, George, were married at Sacred Heart in 1943 and were active members. Weber recalled they always began their day by saying the rosary together and did so until George died in 2006 at age 83. The rosary is still a part of Weber’s daily life.

After their marriage, George, a carpenter by trade, drew up plans for an addition to the front entrance of the church. As administrator of grounds and property, George also moved the altar a few times and did other renovations inside the church, Weber said.

The couple celebrated 63 years of marriage and together raised three daughters. The daughters, Catherine Wedon, Mary Raketich and Rose Schneider live nearby in Michigan. Weber has eight grandchildren and 10 great-grandchildren.

All three daughters were married at Sacred Heart and three of Weber’s grandchildren were baptized there.

Weber, who has had some health problems, said she is grateful her daughters are close by. She said they “hauled me around to doctor’s appointments and kept watch over me.”

During a recent visit to the church, a sign outside said, “Mass tonight at 6 p.m., followed by potluck.” Weber and her best friend, Kathy Counter, wouldn’t miss an opportunity to attend Mass. These days, with the priest shortage, Mass is celebrated once a month at Sacred Heart by Fr. Matthew Settle.

Fr. Settle, who is 41, serves four other parishes. The parish women decided to follow Mass with a dinner “so Father could have something to eat after his long day.” It also helps bring the parish together and there is a lot of visiting when the congregation meets for monthly Mass.

When she was 30, Weber became president of the Christian Mothers Club at Sacred Heart, an office she has held on and off over the years. She is currently president and will be 89 years old in December. The Christian Mothers serve all of the funeral luncheons and Weber still helps serve meals.

She is a long-time member of the parish pastoral council and has held all the council offices. The pastoral council was started by Fr. Wilbert Buhl in 1970. Weber was a trustee, a position she relinquished after her recent illness.

Weber recalls getting ready for a fall dinner and scrubbing the floor of the church basement on her hands and knees. She felt it a compliment when one of the women said, “I see that Dee has scrubbed floors before.”

Weber and Counter, who have known each other for many years, began working together serving funeral luncheons and taking care of other things at the church. Both were looking forward to the recent Mass and the potluck dinner.

“But it isn’t all work,” Counter said. “Dee and I also get in a few games of cards with the others when there is time.”