“I just really liked their mission and what they were about with taking in homeless families, and not only sheltering them,” she said, “but also educating them so they don’t return to homelessness.” 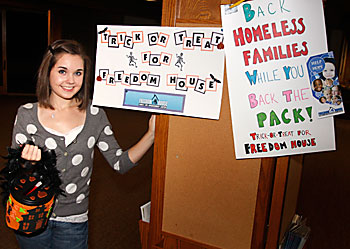 Volunteering immediately opened her eyes to the homeless situation in northeast Wisconsin, she added. Freedom House has a six-month waiting list. Quigley started out working in the free store. She sorted clothing donations and organized the items for distribution. Her plan was to complete her 15 required hours, but connecting a face to homelessness changed her commitment.

“I was just about ready to leave the shelter one night and a girl came in and had two little kids with her,” said Quigley. “It was one of those situations where you should know who they are, but you really don’t know them. It later clicked that I knew her. We had gone to church together at St. Patrick Parish when we were younger. When you can put a face to the word it opens up so many more doors and sheds light on it. It drives it home. After meeting that girl I felt (Freedom House) was where I belonged. It was something I needed to keep doing.”

Quigley, who volunteers one and a half to two hours a week at Freedom House, has performed many tasks including data entry, assisting in the craft room, sorting food for the pantry and “basically anything that needs to be done.” When preparing for confirmation at St. Bernard Parish, she decided to provide financial support to the shelter. She chose the gifts and talents option where the parish provides $10 and the confirmation candidate attempts to make the money grow. Quigley decided to trick-or-treat for Freedom House.

“My Mom (Barbara) talked about how we used to trick-or-treat for UNICEF, so we kind of bounced it off that idea,” said Quigley. “I printed up flyers and put them in newspaper boxes the weekend before to let people know what I was doing. I also collected donations after Mass.”

Quigley raised more than $2,000 for Freedom House. Her initial $10 was also given to the shelter, because she was able to get the printing of the flyers donated.

“We talked about, when the project was done last year, that we wanted to make it bigger this year,” she said. “It’s still a goal of mine to make it bigger again next year. One of my hopes is to get the area Catholic grade schools involved in some way.”

Quigley expanded her efforts this year beyond trick-or-treating. She arranged for the Notre Dame Academy National English Honor Society to sponsor a book fair at Barnes and Noble. A percentage of the Oct. 23 sales for customers presenting vouchers or mentioning the cause were donated to Freedom House. Quigley also tailgated for Freedom House prior to the Oct. 24 Packer game. She contacted Lambeau Field area businesses asking for permission to seek donations in the parking lot. The Bar on Holmgren Way accepted her request.

“We were able to raise $650 tailgating,” she said. “The Viking fans were actually really nice.”

Quigley has also reached out to area businesses for financial support. Shopko contacted her to join the campaign. She spoke at Masses at St. Bernard. The parish community responded with donations totaling more than $2,000.

“It was amazing, last year and again this year, (how) people have so much compassion and want to help out,” said Quigley. “I’ve seen so much generosity.” The final total for her Trick-or-Treat for Freedom House came in at $8,014.

The optimistic attitudes of the people served by Freedom House keep her going and lead her to reflect on her own life, she added.

“It’s been a huge journey,” she said. “I’ve realized that this is what God is calling me to do and it’s completely changed the way I basically live my life and the way I perceive everyone else around me. It made me realize how blessed I am and how grateful I need to be for what I have. I really need to help those who have so much less than I do.”

Quigley plans to attend Marquette University next fall. She is making plans with her brother, Andrew, a seventh grader at St. Bernard School, to keep the Freedom House support going while she is at college. Quigley is considering majoring in social welfare and justice in hopes of going into family or social law. Prior to her Freedom House experience she was on a different career path.

“I know I want to keep service a part of my life,” she said. “Up until last year, I was science driven, but something just changed. I definitely want to help people.