Following last year’s popularity, demand for the team’s message is even calling them beyond the state’s borders. 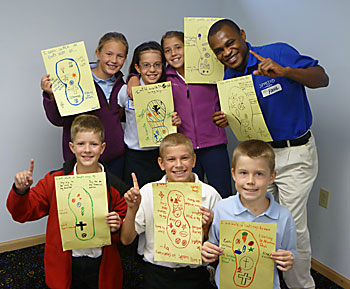 Fifth-graders from St. Bernadette School in Appleton display “footprint” creations describing how “I will walk in God’s way” with Spiritus team member Paul Sangeavur Nomsule. Spiritus is entering its second year of offering retreats to Catholic youth throughout Wisconsin. (By Thomas Kelly | For The Compass)

Eden Foord, director of Mount Tabor, describes how a Minnesota community, sparked by an enthusiastic referral following a Spiritus retreat held in the Archdiocese of Milwaukee last year, was regretfully informed the team would be unable to accommodate their request unless two such events in that location could be booked to justify the added travel. “Within two weeks she called us with another request. So we’re going.”

And from Iowa City, Iowa, came a message to Mount Tabor: “Ask your bishop to bring another team to your diocese.”

“Our hope,” Foord responds, “is that each diocese would have its own youth evangelization team ministry based on this model. This isn’t an isolated group doing something great,” notes Foord. “It takes lots of partners, supporters, volunteers and word-of-mouth backing gained through appeals at Mass, news coverage and our Web site.”

He says Mount Tabor offers itself as a resource to other dioceses for launching this ministry.

Heavy demand presents still another challenge for Spiritus. “Spiritually, physically and emotionally, the team members are stepping out of their young adult lives to give — to surrender — their lives in a radically powerful way,” he says.

Noting the importance of protecting the team’s vitality in order to maintain its effectiveness, Foord says, “We need to be sensitive to their exposure to this new experience and the risk of becoming overworked.”

Meanwhile, Spiritus is finding itself readily embraced by the communities it serves. “Hospitality was never expected in the ways we have received it. We truly appreciate it,” says Foord.

Part of that support can be found in the receptivity most participating parishes demonstrate in allowing Spiritus to appeal for financial support at one Mass during their visit. Foord notes that the appeals inspire a wide variety of vital support, including community prayers, meals for the team and financial gifts to offset expenses.

As an example, he notes how St. Edward in Mackville held a bake sale and donated personal care items “and just about everything else a young adult would need to live for nine months on the go.”

In addition to community support, Spiritus has also realized new backing from the corporate world. “We started a business council last year with the hope of promoting and supporting Mount Tabor, and the response has been encouraging,” Foord notes.

In addition, other corporate supporters, including Faith Technologies and Bergstrom Enterprises, have stepped forward and stood up in support of Spiritus.

Further suggesting how “nothing succeeds like success,” Our Sunday Visitor Institute of Huntington, Ind., with its simple but clearly stated mission “to serve the church,” has also endorsed the Spiritus mission with substantial grant monies.

“These kinds of grants are vital to making our retreats and other programs more affordable, providing access for all,” Foord says.

Despite its growing popularity among enthusiastic participants and the new support from Spiritus backers, Foord says Mount Tabor Center is in a challenging financial situation right now. “Donations have not come in as expected.”