“It was the inspiration of the late Fr. Alan Schieble, who ran the Norbertine Center for Spirituality in the 1990s,” said Fr. Frisch, who for the past seven years or so has organized the music and prayers for the one-hour service. 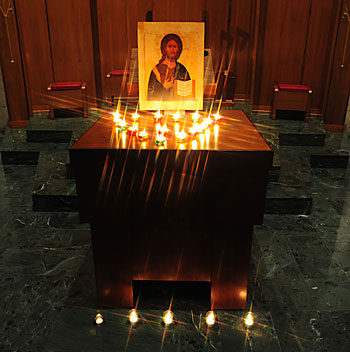 Candles surround an icon of Christ. (Sam Lucero | The Compass)

The format and prayers used at the abbey are taken from an ecumenical community that began in Taize, France. In the 1940s, Br. Roger Schultz, a Swiss native, bought a tiny house in the village in hopes of assisting those in need during World War II.Attracted by Br. Roger’s vision, others soon joined him and together they began a life of common prayer and simplicity.

Today, the community of Taize welcomes more than 100,000 pilgrims from around the world. Many of these sojourners are young people who are captivated by the community’s unique worship, prayer and commitment to service.

According to Fr. Frisch, Taize’s creation of simple melodies and phrases are a tthe heart of the community’s prayer. This style of prayer then is quite adaptable to just about any setting.

“These short phrases or melodies that are spiritual in nature get repeated many, many times.The advantage to that is that is not hard to learn the melody or to learn the text. And it allows the individual to meditate on the phrase,” said Fr. Frisch.

The hour of Taize prayer begins with the abbey bells chiming; then comes some welcoming comments from one of the Norbertines and then gathering music.

“This music of four or five pieces includes songs of praise and I try to include a psalm setting with it. So we have some of the cantors singing verses from the psalms that overlay the repeated melodies that everyone else is singing,” explained Fr. Frisch.

Then comes a Scripture reading followed by several minutes of silence. This is followed by a number of communal or intercessory prayers. 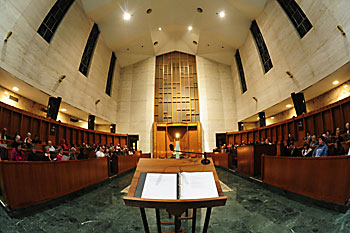 St. Norbert Abbey Church is the home of monthly Taize prayer services. Between 70 and 90 guests fill the church choir stalls for the hour-long service. (Sam Lucero | The Compass)

Fr. Frisch says that this concludes the first half of the hour. The second part of the prayer is dedicated to prayer at the cross. In the choir area, a four-foot cross sits on a bench, where people are invited to come and pray around.

“People will come out of the choir areas and perhaps kneel on the carpeted are aand some will touch the cross with their hands, others will bow before the cross,” said Fr. Frisch.

Throughout this time, songs are being sung. The evening concludes with a closing prayer. Fr. Frisch points out that the hour in its themes and prayers is always evergreen.

“If it’s November during our petitions we will certainly give thanks or we might pray for mothers in the month of May. However, the whole hour is never dedicated to one particular theme.”

Fr. Frisch estimates that each month around 70 to 90 people attend the Sunday night service.Even on the coldest and snowiest nights of winter there are a dedicated number of regulars who come out to pray.

“I think people keep coming back because of the prayerful setting of the abbey. It is proneto singing and has a way of pulling people in,” Fr. Frisch noted. 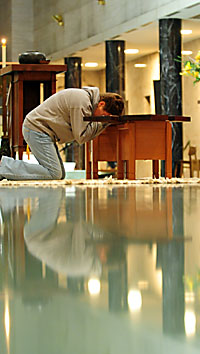 A prayer cross in the center of the choir area serves as a place of meditation. (Sam Lucero |  The Compass)

One of those who has been a regular from the early days of Taize prayer at the abbey is Michele Becker. As the director of liturgy and music at Resurrection Parish in Allouez, she likes the diversity that the hour of Taize prayer offers.

“As a vocalist, the Taize prayer allows me a chance to branch out. It allows me to go deeper and relax than perhaps a traditional Mass setting.”

Becker’s advice for anyone who is on the fence and not sure whether or not to give this spiritual experience a try is to go for it.

“I very much appreciate the abbey’s dedication here,” she said. “It’s a great opportunity to come out and simply be with God.”

“I go because the prayer is settling and it is good for me to be quiet,” she said.

Janssen is the president of Marnocha Funeral Home and serves as the adult faith formation coordinator at Assumption Parish, both in Pulaski. She says that she has been a regular at the Sunday nights for six or seven years now.

Each year she brings her RCIA students to a night of Taize prayer as a way to introduce them to a different form of prayer and worship.

“The abbey just does such a good job. The cantors and the musicians are all top notch. It is simply good prayer.”