The current stone church was built “around the second church,” which was made of brick, said Bill Graf, a trustee and lifelong parish member who, along with Jeanne Weber, has compiled the parish history over the years. Following completion of the main auditorium, the old building was razed so that materials could be used for the new church. The total cost of the new building was $38,295.61. 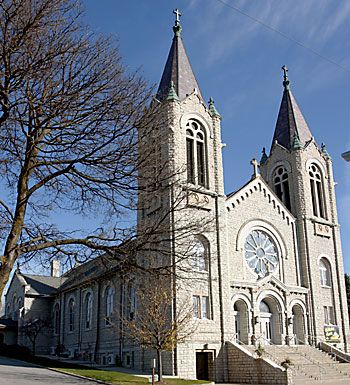 St. Joseph’s two large steeples stand out for visitors arriving from the south. Graf said the construction is amazing considering the tools available at the time the church was built.

“That was quite some engineering back then,” he said. “I look at those steeples and think about how they didn’t have hydraulic lifts like we have today. They took the stone from a quarry in the northern part of the county.”

Graf has put together a brochure commemorating the 100-year history of the church. Included is a photo from the construction days featuring a pile of stone, a steam tractor, several working men and some mules.

Graf also has the financial statement from the church construction. Parish members were required to give more than $5 over a three-year period to be listed as a contributor. Msgr. Alphonse Broens, pastor at St. Joseph from 1887 to 1930, gave the largest gift, $1,000.

“I believe his family was wealthy,” said Graf, noting that $1,000 would equal much more today.

Renovations and updates to the church have been made throughout the 100-year history. During Fr. Anthony Koeferl’s tenure as pastor, which began in 1932, a new school and rectory, then known as a parsonage, were built.

During the ’70s and early ’80s, a large garage was built and social hall and kitchen were renovated. A cemetery chapel and mausoleum were also built off Hwy. 42 on the north side of town.

Fr. Tom Golden became pastor in 1986. Under his leadership, the church was completely remodeled. The church interior was redecorated, structural repairs were made and new side entrances were built, including one that is wheelchair accessible.

In 1999, St. Joseph was linked with Ss. Peter and Paul Parish, Institute. A year later, a fire broke out in the ramp entry way. There was no serious damage, but an extensive cleaning process was required after black smoke filled the church.

More recent updates included protection of the stained glass windows, which have been cleaned, repaired and encapsulated. Air conditioning was installed in 2006 and the sound system has been upgraded.

The church has prospered from the good graces of the people, said Terry Burr, pastoral assistant. He said that a couple recently gave a $100,000 gift. The church seats approximately 650 and will serve the needs of the parish for years to come, he added.

“The main thing is to keep up the building,” he said. “We’ve talked about adding a narthex. We are also looking at new carpeting. New tile was installed a year ago.”

“It’s not a cathedral, but we proudly call it the cathedral of Door County,” said Graf. “I think about the foresight of the people 100 years ago. … They had the vision to build this church large enough to serve the future growth of the area.”

Information for this story was provided by the parish history compiled by Jeanne Weber and Bill Graf.