Scalia was the keynote speaker and invited guest at the first gathering for the St. Thomas More Society, which is named after the 16th century English lawyer, judge and diplomat who served as chancellor of England. A Catholic, he went to his death on July 6, 1535, for refusing to submit to an oath of supremacy to King Henry VIII, which denied papal supremacy. 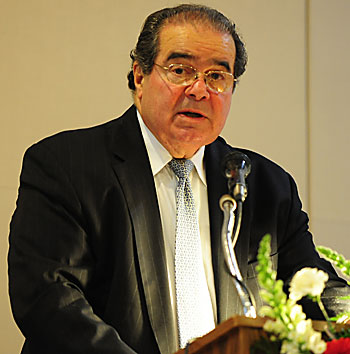 The evening began with a Red Mass at St. Francis Xavier Cathedral. Red Masses date back to the 1200s and are celebrated annually for judges, attorneys and government officials. Their purpose is to request guidance from the Holy Spirit for members of the legal community. The Mass included the traditional procession of judges into the cathedral. Twelves judges, including Scalia, led the procession.

In his homily, Bishop Ricken said that members of the legal community “must live as St. Thomas More did, in accordance with their own rightly conscience.”

“It is a tragedy that the secular forces in our society today have pushed so many public and government officials into living what can be called a divided life,” he said. “Such officials may know at the core of their being that Christian faith rests on the principal of all truth, that all goodness comes from God. And this requires the formation of a conscience in accordance with God’s natural and moral laws.”

“St. Thomas More asks us to wake up,” he said. “He rejected trying to live with a divided heart and instead retained his personal integrity by following his conscience, even at the cost of his own life.”

Bishop Ricken listed examples of laws supported by public officials that are contrary to God’s laws. These include abortion, embryonic stem-cell research and physician-assisted suicide. “In these and many other instances, human reason has become distorted by not understanding or even denying the purpose of law.”

He said it is possible for Christians to follow their consciences while being tolerant of those whose beliefs are contrary to Christian faith.

“I would say that we can be tolerant in the correct sense of that word,” Bishop Ricken said. “By interacting peacefully with those who believe other than we do, without, at the same time, approving the beliefs of others as though they were true. In this way it is possible and even imperative to live by our consciences, to preserve our own salvation and to be witnesses to the truth, in ways that may assist others to find salvation.”

He told members of the legal community that integrity and strength of character require prayer. He also reminded them to “adopt St. Thomas More’s practice of adhering to a Christian form of conscience, no matter what the cost.”

At the KI Center, Scalia was introduced by Bishop Ricken, who told the audience that he had met the justice in Rome while visiting seminarians from Cheyenne in 2005. Bishop Ricken said he had invited Scalia to Cheyenne, “and just as he was supposed to get there I was moved here” as bishop in 2008. When he asked Deacon Paul Umentum to establish the St. Thomas More Society for the diocese, Bishop Ricken contacted Scalia and invited him to serve as speaker at the society’s first event.

In his address, Scalia said Christians have been derided throughout history for their beliefs. “Surely, those who adhere to most or all of these traditional Christian beliefs are regarded in the educated circles as, well, simple people,” he said. Scalia referred to a Washington Post story in which Christian fundamentalists were labeled “poorly educated and easily led.”

“The same attitude applies to traditional Catholics,” he said. “By which I mean those who do such positively petrifying things as saying the rosary, kneeling in adoration before the Eucharist, going on pilgrimages to Lourdes or Medugorje, and worst of all, following indiscriminately, rather than in smorgasbord fashion, the teachings of the pope.”

Scalia said that St. Paul, in 1 Corinthians, admitted that “the wise of the world would regard Christians as fools. And from the beginning until now, that expectation has not been disappointed.”

While some have ridiculed Christian beliefs, others have tried to revise those beliefs which they found irrational. Scalia described Thomas Jefferson’s attempts to whitewash the New Testament by creating what is popularly called the “Jefferson Bible.”

“Jefferson’s Bible does not begin with the betrothal of Joseph and Mary and the annunciation by the angel Gabriel, or the conception by the Holy Spirit,” he said. “It begins with the decree from Caesar Augustus” that a census be taken. Nor does Jefferson’s Bible include mention of Jesus’ resurrection.

“As I told you earlier, the wise do not believe in the resurrection of the dead, just as they do not believe in the Virgin birth. So everything from Easter morning to the Ascension has to have been made up by those grumbling authors, presumably part of their clever plan to get themselves crucified,” said Scalia.

He said that reason and intellect do not have to be abandoned in religious matters. “A faith that has no rational basis is a false faith,” Scalia said. “It is not irrational, however, to accept the testimony of eyewitnesses who had nothing to gain by the … resurrection of Jesus Christ. … What is irrational, it seems to me, is to reject, with no investigation, the possibility of miracles in general and Jesus Christ’s resurrection in particular, which is precisely what the worldly wise do. They just will not have anything to do with miracles.”

Unlike Jefferson and other sophisticated scholars, St. Thomas More embraced the mysteries of his Christian faith, said Scalia.

“His life, or more precisely, the ending of his life, is the prime example of the Christian as cretin,” said Scalia. “More was one of the great men of his age: lawyer, scholar, philosopher, statesman; a towering figure. You will have missed the deep significance of More’s martyrdom and you will not understand why More is a particularly apt patron saint for lawyers, scholars and intellictuals … unless you appreciate that the reason he died was, in the view of almost everyone at the time, a silly one.”

ng to deny Jesus Christ or his teachings, “Thomas More … went to his death to support the proposition that only the pope of Rome could bind or loosen the marriage of Henry VIII,” said Scalia. “As one biographer put it, ‘More died for a papacy that, as far as man could see, was little else than a small Italian prison ruled by some of the least reputable of the Renaissance’s princes.’ But of course More was not seeing with the eyes of man, but the eyes of faith.”

St. Thomas More “believed Christ’s word that Peter was the rock,” said Scalia, “and the Christian tradition that the pope was the head of the church. As low as the papacy had declined, the Vicar of Christ alone, and not all of the bishops of England, had the power to bind and loosen.”

Like St. Thomas More, today’s lawyers and judges need to have the courage to be “fools for Christ,” said Scalia.

“Are we thought to be easily led and childish?” said Scalia. “Christ did constantly describe us as, of all things, his sheep. And Christ said we would not enter the kingdom unless we became like little children.

“For the courage to suffer the contempt of a sophisticated world, we lawyers and intellectuals who do not like to be regarded as unsophisticated, can have no greater model than the patron of this society. The great intellectual, foolish, childish man that he was,” said Scalia. “St. Thomas More, pray for us.”