“A lot (of the cremains) were just unclaimed and for a number of reasons,” said Fr. Schmitt following the service. “The funeral homes did their diligence in trying to find family members first.” 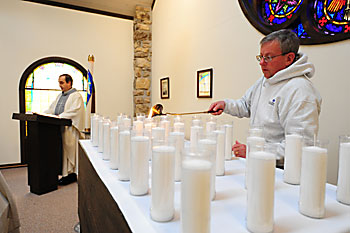 According to Todd Huehns of Huehns Funeral Home, giving the cremated remains a dignified resting place was the main reason he contacted St. Joseph Cemetery earlier this year. All but one of the cremains were identified, and after unsuccessful attempts at uniting them with families, the funeral homes decided to approach the Catholic cemetery.

“Once (efforts to find relatives were) exhausted we contacted Fr. Carl and asked if we could proceed” with interment at the cemetery, said Huehns. “Fr. Carl said he would take care of contacting the cemetery board and find out if they could help. They provided at no cost the space in the mausoleum and said it was all part of their ministry for these souls; that they needed to be somewhere.”

Fr. Schmitt said he was adamant that if families in the future came to claim cremains they would be able to do so. That is why all the cremains were placed in one crypt, he said. 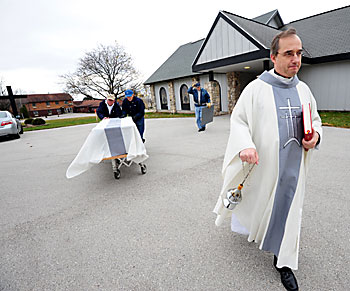 Fr. Carl Schmitt leads a procession from the St. Joseph Cemetery chapel to the outdoor mausoleum. (Sam Lucero | The Compass)

“If I was a person who was away from my parents and found they had died, I would want a paper trail to find them,” he said. “They would be able to go to the city hall and find a death certificate. With that, they would find the funeral home” and receive information on the unclaimed cremains.

They chose to have the service in November “because that’s the month we remember souls,” added Fr. Schmitt, who invited other Christian clergy to attend the service. The 33 cremains were placed inside four blue plastic containers. Names of the deceased were written on paper and taped to the top of the container in which they were placed.

The containers rested on a sheet of plywood fastened to a casket cart. They were covered with a pall and sat in front of the chapel altar. Before the funeral service began, 33 candles, representing each deceased person, were placed on the altar.

After welcoming guests, Fr. Schmitt read the names of the deceased while cemetery sexton Bob Spude lit the candles. Fr. Schmitt then used holy water to bless the containers and Pastor Joe Mitchell of United Methodist Church of Sturgeon Bay and Jacksonport read a Scripture passage.

Following the day’s Gospel reading, Fr. Schmitt said the service was different than any other because nobody knew the deceased. “All we know is that they were born Christian and we know we are giving them back to God,” he said. He then played an Irish hymn on a CD player and asked the group to “pray for each of these 33 souls, for the grace of God to be upon them.” 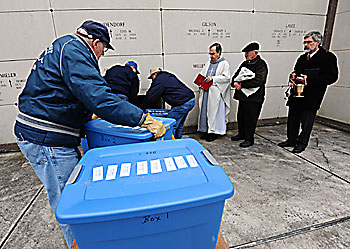 Cemetery sextons transfer the cremains of 33 people into the mausoleum crypt Nov. 18. Each container included the names of those cremated affixed to the top. One cremain was unidentified. (Sam Lucero | The Compass)

The chapel service ended with Fr. Schmitt using a censor to bless the containers with incense. A procession then followed from the chapel to the cemetery mausolem, where Fr. Schmitt concluded the service with a Rite of Committal. Sextons Spude, Lou Behrens and Clifford Ohlrogge transferred the four containers from the casket cart into the crypt.

“To you, oh Lord, we commend the souls of your servants,” said Fr. Schmitt. “In the sight of the world, they are dead. In your sight they will live forever. Forgive whatever sins they have committed through human weakness. In your goodness grant them everlasting peace.”

After the service, Fr. Schmitt explained why the funeral rite was important.

“Our life here on earth is precious and sacred and it’s important that we have a sacred final place of rest,” he said. “It wasn’t an option, in my opinion, to keep them on a shelf somewhere else.

“We are in the business of saving souls and giving (the bodies) a final place of rest,” he added. “It was an easy decision. I was humbled to be part of this.”