Upon declaring the words, “I do hereby approve these apparitions as worthy of belief…” the crowded chapel burst into applause with many in attendance moved to tears. 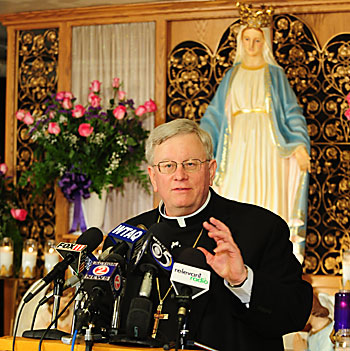 “This is now an official declaration and an explicit recognition of what has been going on in the development and expression of people’s faith in our Lord Jesus,” Bishop Ricken said in his homily. “Mary always leads us to Jesus. We hold Mary in such high regard because she is the mother of our savior Jesus Christ. So she is probably the greatest evangelist and catechist who ever lived. … She has been sent out all these years since Christ’s death and resurrection to proclaim this good news.”

Bishop Ricken said that the proclamation was a desire of many people. “So many of you have asked for this in one way or another,” he said. “I regard this also as a simple declaration in that it already states what has been going on here so quietly for so many years.”

“I think today is a gift we give back to the Blessed Mother for all the prayers she has answered in this place. All the solace and comfort she has given to troubled souls,” said Bishop Ricken.

“In many ways it is also a thank-you gift to Adele Brise, that Belgian immigrant who came here to this country. … We owe a great deal to her witness because she was simple, she was uneducated in our terms today. She was a humble soul, but she was obedient.”

Bishop Ricken added that the message Brise answered in teaching children the faith is the same message people are called to today. 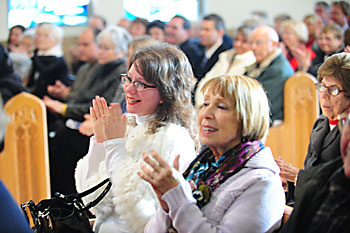 Guests at the Mass applause after Bishop David Ricken announces that the apparitions given to Adele Brise have been deemed worthy of belief. (Sam Lucero | The Compass)

“We need this message today as much as they needed it 150 years ago; the message to proclaim the Gospel, each one of us, in our families and in our workplace. We need to have that same zeal for souls that Adele Brise had. And we need to make sure that we are responsible to our children and to the next generation by providing adequate catechetical formation for them so that they understand the Gospel and that they are able to defend and explain the teachings of the church. This message is ever ancient and ever new. Each generation must take it.”

The decree on the apparitions’ authenticity comes nearly two years after Bishop Ricken opened a formal investigation into the apparitions. On Jan. 9, 2009, he appointed three theologians to study the history of the alleged apparitions.

“They are all theologians with a particular concentration and expertise in the theology of the Blessed Virgin Mary,” said Fr. John Doerfler, vicar general and chancellor of the diocese. Although the three theologians were not named by the diocese, Fr. Doerfler said two of the three are internationally recognized and they have “general experience in examining apparitions.”

Adele Brise, a Belgian immigrant, was 28 when the Blessed Mother appeared to her three times in October 1859. The first appearance took place on while Brise was carrying a sack of wheat to a grist mill about four miles from Robinsonville, now known as Champion.

A few days later, on Oct. 9, as Brise walked to Sunday Mass in Bay Settlement, about 11 miles from her home, Mary appeared to her again. After Mass, Brise told the pastor what she had seen. He told her to “ask in God’s name who it was and what it desired of her,” according to a historical account found on the shrine’s Web site.

On the way home from Bay Settlement, Mary again appeared to Brise. When Brise asked who the woman was, Mary responded, “I am the Queen of Heaven, who prays for the conversion of sinners and I wish you to do the same.”

Bishop David Ricken gives his homily at the Dec. 8 Mass at the Shrine of Our Lady of Good Help. (Sam Lucero | The Compass)

She told Brise to “gather the children in this wild country and teach them what they should know for salvation. Teach them their catechism, how to sign themselves with the sign of the cross and how to approach the sacraments.”

Brise devoted the rest of her life to teaching children. She began a community of third-order sisters and built a school next to the shrine. Brise’s father, Lambert, built a small chapel near the spot of the apparitions. When a brick chapel was built in 1880, the trees where Mary appeared were cut down and the chapel’s altar was placed over the spot.

A school and convent were also built next to the chapel. The current chapel was dedicated in 1942 under the title of Our Lady of Good Help. Today the shrine, which sits on six acres of farm land, receives thousands of visitors each year.

Brise died on July 5, 1896, and was buried in a small cemetery just east of the chapel.

Fr. Doerfler, who serves as the shrine’s rector, said that official recognition of the apparitions affirms “the mystery of God’s providence.”

“He has had the Blessed Virgin Mary appear here. I do not know the reasons why,” he told The Compass. “All of this … has to do with God’s plan to bring people to salvation through his son Jesus Christ.”

Apparitions have taken place throughout history “as a sign of God’s providence, to remind us of what God has already revealed,” said Fr. Doerfler. “As a loving mother would remind her children about things that are important, so our Blessed Mother Mary has appeared throughout history to remind us of things that are important for our salvation and to draw us closer to her son.”

Marian apparitions date back to the fourth century and have been reported around the world, according to the University of Dayton’s Marian Library, which holds one of the world’s largest collections of research on the Blessed Mother. The Marian Library lists 11 Marian apparitions that have received official approval by diocesan bishops worldwide since 1900.

Karen Tipps, who has been a volunteer and caretaker of the shrine with her husband Steve for 18 years, said Bishop Ricken’s decree “is the fulfillment of everything we’ve worked for: to make the shrine a beautiful place of pilgrimage; to try and promote the message of what happened here.” 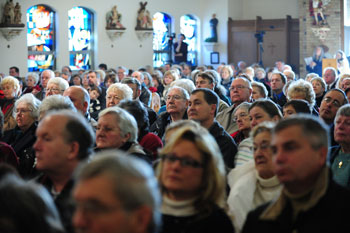 More than 250 people packed the Shrine of Our Lady of Good Help’s chapel to hear Bishop Ricken announce his declaration on the validity of the apparitions to Adele Brise. (Sam Lucero | The Compass)

“The shrine has had pilgrims for more than 150 years … but in the church view and the world view, having the bishop go to this length to get the commission going, it’s what others need for affirmation of what happened here,” said Tipps.

She believes that the timing of the apparitions’ approval was part of a divine plan.

“It’s now because this message is meant for this time in history,” Tipps told The Compass. “If you look at the state of our children right now, there’s no hope. There’s no faith. There’s nothing to live for.”

She said a “crisis in catechesis” exists today, much like it did when Brise was told to teach children their catechism.

“The message (given to Adele Brise) is, ‘Gather the children. Teach them their catechsim. Teach them their faith,” she said. “We need to do that. … We’re not giving them the substance of their faith. So I think that’s why it is happening at this time in history. That’s why Bishop Ricken was brought here. I think it’s a divine plan that this needed to come to fulfillment now for the world to get this message.”

Tipps said it will be a big adjustment having more people visiting the shrine. “It’s been such a quiet place. But now it’s for the world to be able to share … what we’ve had here and what we’ve experienced for the last 150 years.”

At a press conference held in the shrine’s crypt following Mass, Bishop Ricken said he has had a strong devotion to the Blessed Mother since his childhood. “When I came and found that this shrine was dedicated to her and to her intercession, I was so pleased and happy to see that so many good things have come about here — story after story. It’s living proof that something authentic is here.”

In response to a question, Bishop Ricken said there were no plans to begin an investigation into Brise’s cause for canonization. “That’s a very formal, long-term process and there aren’t any plans for that at this point for sure,” he said. “But we can state equivocally that through people’s testimonies, prayer after prayer has been answered. Not just simple prayers, but sometimes prayers for hopeless cases.”

Just across the room from where the bishop stood were dozens of crutches and canes left there by people who say they were cured through Mary’s intercession.

Bishop Ricken said the diocese is in “the very beginning stages” of preparing for what could be a large turnout of pilgrims to the shrine now that the apparitions have been declared valid.

“We’re also just trying to get through this phase of making the announcement and see how people respond,” he added.

Among those attending the Mass were Jeff and Jennifer Koss, members of Immaculate Conception Parish in Luxemberg. “I’ve been coming to the shrine since I was little boy,” said Jeff Koss. “When my wife and I got married, we actually started coming out here more often. We developed a real spiritual sense when we started coming here. We’ve been praying for this (approval) for a long time. We’ve become closer to our faith coming here. I have had a call to the diaconate and I’m going to continue to pursue that.”