Following in her parents’ footsteps, Peggy devotes the bulk of her volunteer efforts to St. Pius, both the school and the parish. “Every facet of life in the church my parents were involved with, so that was always part of life for me and my sisters and two brothers,” she said. 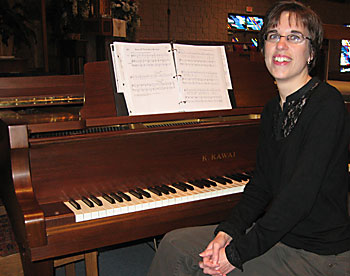 Peggy started piano lessons when she was in fourth grade. By eighth grade she was playing at school Masses. “I recall going up to Sr. Shawn, who was the principal, and saying, ‘I think I can do that.’ My sisters played piano but they could also get by on the organ. My sister Mary brought me in and showed me how to play the organ, because the touch on an organ is different than a piano. You have to slide your fingers instead of picking them up.”

She said the organ’s foot pedals are still a challenge. “People who can do that amaze me because it’s hard enough to look at two staffs of music without having to look at a third for your feet.”

That began Peggy’s career of playing for Masses at St. Pius X.

About a year later, after a religious education class, she waited at church while her parents were practicing with the choir.

“The choir director was practicing with them and so I sat down and started playing the choir music, accompanying them,” she recalled. “That was the first time she heard me play. She was in charge of music for the parish. About three months later I got a call from her and she said, ‘I think you’re ready to play at Masses on Sunday.'”

Peggy was in ninth grade at the time. “I recall that first night, I was so nervous. She was my cantor. She took me out to the stairway near the organ area and she prayed with me before Mass. I felt hands on my shoulders. The presence of God was so palpable I thought, ‘This is what God wants me to do.’ I’ve been doing it ever since.”

Currently Peggy plays for Masses at St. Pius but she wears several other hats.

“I direct the traditional adult choir and I direct a praise group called Praise Ensemble,” she said. “At the school I play for the school Masses and I help the teachers plan their liturgies, help them pick out music and I work with the students who are going to be cantoring for those Masses.”

Leah and Anna share their musical talents with the church, just like their mom. “Anna played a piano duet with me (recently) at church. Leah has played cello for me a couple of times. Anna is in her second year with the Singing Angels children’s choir,” noted Peggy.

Brian is very supportive of Peggy’s church endeavors. “I think he has the harder job on Sunday being in the pew with four kids. I get to sit up at the piano and actually get to listen to what Father is saying,” said Peggy.

A performer at heart, Peggy is energized when she provides music at St. Pius. “Part of the high that comes from that is not only doing it for the Lord but just doing it. On the feast of Christ the King or Christmas Eve I have the brass playing with us and it thrills me to be able to be part of that.”