Even in retirement, Fr. Kiefer keeps his hands in ministry

“I enjoyed every assignment I had. It was rich for me personally. I had good leaders; people who let me spread my wings a little bit,” said Fr. Kiefer, who retired as pastor of St. Anthony Parish in Neopit on Sept. 1, when he received senior priest status with the diocese. (He also was pastor at Phlox and administrator at White Lake/Langlade.) On Nov. 1, he returned to live at Neopit to become its sacramental minister. He is also sacramental minister for St. Joseph/Holy Family in Phlox, St. Francis in Gresham and St. Michael in Keshena. 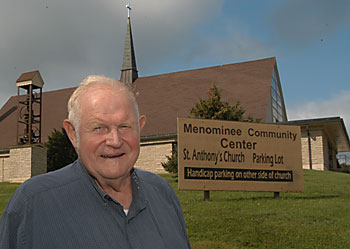 “I’ve enjoyed being there,” he said of St. Anthony’s. “I enjoyed the work, I enjoyed the friendships, and I enjoyed the challenges. So the lifestyle up there for 19 years, well, I’m not sure if I could follow up with the active lifestyle here,” he added, referring to Green Bay, where he was born in 1936.

Fr. Kiefer credits his family — including his next-door cousins who became priests, Frs. Paul and Mark Schumacher — with his own realization of a call to priesthood. From his grandparents “who led lives of holiness” to his parents, Ray and Regina, to the pastors at St. Matthew Parish, the Norbertines at Central Catholic High School in Green Bay, and the Bay Settlement Franciscan Sisters who were his teachers in grade school and his friends in ministry, Fr. Kiefer credits many with helping him develop “the sense of (priesthood) being a noble way to spend my life.”

He especially credits Msgr. Joseph Marx, “a gentle man and a wise man,” with guiding him and even with being the reason why he was sent to Rome to study. “He never said, but I have never had a doubt in my mind.”

Dave Kiefer and his brother, Paul, were regular servers for Msgr. Marx every morning for 6:30 a.m. Mass at the McCormick Home in Allouez, where Msgr. Marx was chaplain for many years. One of the perks for the boys was breakfast at the home with Msgr. Marx, “where we could talk about the history of the church, the history of the diocese.”

When he was sent to Rome as a seminarian, Fr. Kiefer found many challenges, including the pressure not to disappoint his bishop back home. But there was also a lot of excitement because the Second Vatican Council was under way, with the council’s first session, in fall of 1962, held during his last year of studies.

Fr. Kiefer was also in Rome for the death of Pope John XXIII on June 3, 1963, and the election of Pope Paul VI on June 21, 1963, the day he bought his final plane ticket back home.

He admits that, while he had known Pope John XXIII “was a good man,” he was not really impressed with the former Cardinal Angelo Roncalli until the pope was dying. Fr. Kiefer remembers standing in St. Peter’s Square at the time and seeing women “kneeling on the cobblestones and praying the rosary” and later seeing peasants who came in from the fields after working all day to stand in line for hours just to walk by the pontiff’s coffin.

“At that time, I was very caught up in trying to be sure I followed the rules (as a seminarian),” Fr. Kiefer recalled. “And all of a sudden, I saw this man, who broke so many of the rules, so many of the customs of the papacy, (in order) to come across as a human being with a big heart. And I’ve tried, through the years, to change to be like him. And to let the rules go by, if they get in the way of the grace of God.”

When he arrived home, it wasn’t long before Fr. Kiefer was appointed administrator at St. Mary High School in Menasha, where he served for six years. Then he was named as director of Sacred Heart Seminary in Oneida in 1972. While the seminary was in its last years — it closed in 1976 — it was also the site of much new ministry training.

“The first parish council training meetings were there,” Fr. Kiefer said. “We’d have 800 people for a Saturday.”

Because of his experience at Sacred Heart, and as director of the diocesan pastoral council, Fr. Kiefer was asked by Trappist Fr. Vince Dwyer to come to Washington, D.C., to work at the Center for Human Development in 1980. He became a field representative, traveling the country — 63 dioceses in the U.S. and Canada — working with priests as they worked on setting up parish councils and priest support networks.

He returned to the Green Bay Diocese in 1984 to be director of personnel and became the first diocesan Vicar for Priests (1987). Over the years, he also filled in as administrator or priest moderator at several parishes, including Immaculate Conception located on the Oneida Reservation.

It was not the first time Fr. Kiefer had worked with members of the tribe. As a young man, he had played amateur baseball, often against teams from Oneida, and made many friends there. And then, at Sacred Heart Seminary, he had business dealings with the tribe. The seminary often rented space for tribal needs, and hosted a summer school program with the tribe there.

In 1991, as part of his job on the diocesan personnel board, he went to Neopit to interview parish members as they searched for a new pastor. To his surprise, he felt instantly at home and was impressed that the people were so involved that the parish meeting drew “almost a full church.”

Fr. Kiefer returned to Green Bay and asked Bishop Robert Banks’ permission to be that new pastor. In August of 1991, he went to Neopit. “The people have been very good to me,” he said. “They share their life stories and I try to be supportive of those life stories.”

For the future, he hopes to keep meeting the sacramental needs at Neopit, continue to hunt and fish as pastimes, feed his passion for newspapers and perhaps travel.

When asked about his 48 years in active priesthood, Fr. Kiefer said, “I’m not sure there is a highlight. All the assignments I’ve had excited me. I never left any of them disappointed. So there were a lot of things (to remember) in each place. But the friendship of the people I’ve come to know — they were all highlights.”