CHAMPION — Adele Joseph Brise’s story began when she arrived from Belgium with her parents, Lambert and Marie Catherine Brise, two sisters and a brother in 1855. They bought a farm at Red River, near the border of Brown and Kewaunee counties.

Adele had her first of three apparitions while carrying grain to a mill near Dyckesville on Oct. 9, 1859. On the following Sunday, while walking to Mass in Bay Settlement, the Blessed Mother appeared again. During the third vision, while returning home from church, Adele said Mary identified herself as “the Queen of Heaven” and told her, “Gather the children in this wild country and teach them what they should know for salvation. Teach them their catechism, how to sign themselves with the sign of the cross and how to approach the sacraments. That is what I wish you to do. Go and I will help you.”

So the 28-year-old gathered the children and taught them about the faith. She would travel to farms, sometimes 50 miles away, to teach them. While Adele was never a vowed religious, she gathered a lay community around her, known as the Sisters of Good Help. Adele, called Sr. Adele, became their leader. 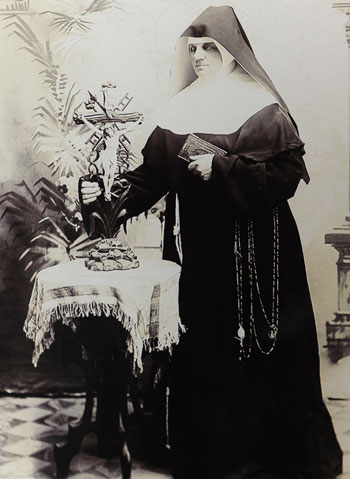 It wasn’t until 1867 or 1868 that the first school was built on the chapel site. St. Mary’s Academy, a boarding school, had 95 students enrolled by the 1871-72 school year. Sr. Adele supported the school by relying on God and the generosity of those she met. She sometimes went begging for what she needed.

One of Sr. Adele’s students was 6-year-old Odile Allard, who arrived at St. Mary’s Academy with her baby sister after their mother died. Odile, (later Sr. Marie du Sacré Coeur) stayed until she was 15. “I don’t remember that there were less than a hundred children, the year around at the Chapel, mostly orphans,” she wrote in a letter to the sisters at Bay Settlement.

The first shrine chapel was built by Adele’s father. It measured 10 feet by 12 feet and was located near the spot where Mary appeared to Adele. A larger chapel was built in 1865. The present chapel was completed in 1942. The altar in its crypt stands over the site of the reported visions. Logs from the trees between which Adele said Mary appeared can be seen in a display case in the shrine’s gift shop.

Fr. John Doerfler, vicar general and diocesan chancellor, is rector at the shrine.

“What is really remarkable about Adele,” he said, “is that her life had a real focus to pass on the faith to the children. She gave her whole life to this. And she was a simple, yet strong and dedicated, woman of faith. It was not an easy life. Yet she lived this life with joy, with humility, with abandonment to God’s providence and reliance on the intercession of the Blessed Mother.”

Bishop David Ricken, who said he was “thrilled” to learn that the diocese had a shrine dedicated to the Blessed Mother, echoed Fr. Doerfler’s sentiments. 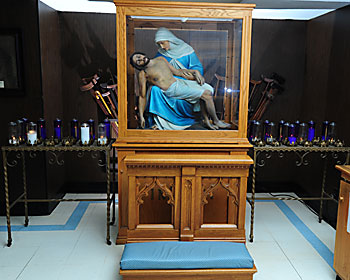 A statue of Mary holding Jesus’ body is located in the shrine’s crypt. Behind the statue are crutches and canes left by people who say they were cured of ailments through Mary’s intercession. (Sam Lucero | The Compass)

“What has stuck me about the story of the life of Adele Brise is her lifelong fidelity to what the Blessed Mother asked her to do with her life,” he told The Compass in 2009. “She dedicated her life to prayer, especially for the conversion of sinners, and to the catechesis of children. She made great sacrifices and attracted other young women to follow her in her fidelity to the Blessed Mother’s call.”

The night of fire

Sr. Adele was well known for her faith. When the Peshtigo fire of Oct. 8, 1871, threatened the area, people brought their families and farm animals to the grounds of the chapel.

During the night, the faithful, led by Sr. Adele, carried a statue of Mary around the perimeter of the grounds in prayer. By the morning, a downpour doused the flames. Outside the perimeter of the chapel grounds, everything was burned; yet the inside of the five-acre perimeter remained unscathed. To this day, many consider the event a miracle and the procession around the grounds has been repeated every year on Oct. 8.

Fr. Doerfler said he feels that the popularity of the annual October events is a realization that “we have a real tendency today to think technology will be our salvation. And while technology can help us with many, many things, it cannot save us. And it cannot answer the questions of the deepest longings of the human heart.”

Another annual event at the shrine is the outdoor Mass each May. The event was started in 1895 by Norbertine Fr. Bernard Pennings (later Abbot Pennings, founder of St. Norbert Abbey and St. Norbert College in De Pere). It included a procession to the chapel’s grounds.

But the most popular event is the annual Mass on the feast of the Assumption. 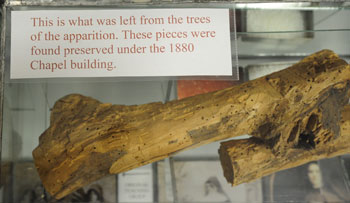 Wood from the trees between which the Blessed Mother appeared to Adele Brise is preserved in a glass case near the shrine gift shop. (Sam Lucero | The Compass)

“For 151 years, that’s been the event to be here for,” said Karen Tipps. She and her husband, Steve, have worked at the shrine for 18 years. Each Aug. 15, cars will line the small county road in front of the shrine’s grounds for a mile or more, starting early in the morning.

Sr. Mary Ellen Lowney, a member of the Sisters of St. Francis of the Holy Cross at Bay Settlement, was assigned to the chapel from 1972 to 1978, and she too recalls the crowds that came for the Assumption feast. But she saw it as only one aspect of the prayer life of the descendants of the Belgian immigrants, like the Brise family.

“What really impressed me was the deep faith that the Belgian people had for the Blessed Mother,” Sr. Mary Ellen said. “I would see men drive up early in the morning and go in to pray. And we’d see the same thing on their way home from work.”

The faith of those people helped Adele continue her school and the prayer site there until her death on July 5, 1896. She is buried in a small cemetery to the east of the chapel, not far from the site of the reported apparitions.

After Adele’s death, the school faltered and, in 1902, Bishop Sebastian Messmer turned the responsibility for it over to the Sisters of St. Francis of the Holy Cross of Bay Settlement. Sr. Pauline LaPlante, one of the community’s original members, took over the boarding academy and ran it until her own death in 1926.

The school was remodeled into the Home for Crippled Children in 1933. In 1953, Bishop Paul Rhode discontinued the home and that building, built in 1885, became a pre-novitiate high school for the Bay Settlement Sisters. In 1970, the grounds became a House of Prayer, staffed by the sisters for another 20 years. In 1990, the diocese assumed control of the grounds as a shrine and remodeled the grounds to welcome a group of Carmelite Sisters from Michigan, who founded the Carmel of the Holy Name of Jesus in 1992. In 2002, the Carmel moved to rural Denmark. 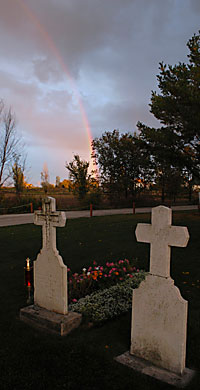 The grave of Adele Brise, left, is pictured near the Chapel of Our Lady of Good Help in Champion. (Sam Lucero | The Compass)

As for Adele Brise’s reported encounters with Mary, Bishop Ricken appointed a commission to study the apparitions on Jan. 9, 2009. While each of the bishops of Green Bay has supported the shrine as a place of prayer over the years, there was never a formal declaration regarding the apparitions.

With Bishop Ricken’s decree on the authenticity of the apparitions of 1859, the Shrine of Our Lady of Good Help becomes the first approved Marian apparition site in North America. It will be a place of pilgrimage for people around the United States and beyond.

Over the years, the chapel has filled many roles: boarding school, a home for children with handicaps, a place of refuge in disaster, a retreat house and monastery. Today, with Bishop Ricken’s decree, prayer will continue to remain at the heart of the shrine’s mission.

“I think that’s evidence of how the Lord wants to touch the lives of people and meet their spiritual needs in any given age,” said Fr. Doerfler.

Editor’s note: James Marsala, shrine historian, contributed to this story. For a complete history on the shrine, visit the shrine Web site.