“I didn’t really know what was happening,” said Clare. “I was confused. I was really glad that we won. I knew that we would be able to even though I wasn’t there. I’m just glad that we actually did.” 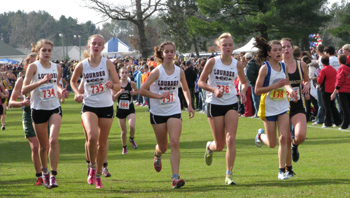 This season marked the fifth consecutive trip to state for the Lourdes girls and the fifth straight Trailways Conference championship. The feat is even more impressive when considering that the program was only restored seven years ago with a small number of runners. Cross country for both the girls and boys had been dormant at Lourdes for several years.

The Lady Knights were also favorites to win a state title in 2009, but finished fifth. The 2010 squad didn’t talk much about winning a championship, but the entire team believed it could, said Keller. The impact of the top freshmen offset the loss of the seniors from the previous season.

“The top four girls (from Lourdes) usually run together and then it’s pretty much whoever feels the best at the end,” said Clare. “Michaela always has a nice kick at the end. It was reassuring coming into the season and seeing that (the freshmen) were all really good.”

“In middle school they were always up there, but we didn’t know they would be in the 15s (minutes) by the second race,” said Keller, who earned all-conference honors this season.

The team, coached by LeeAnn Silvis, is a close knit group, said Clare. LeeAnn’s husband, Rodney Silvis, is the Lourdes boys cross country coach. The couple works with all the runners and the boys and girls teams regularly practice together.

“I think it helps a lot that they’re husband and wife,” said Clare. “Everything flows. We are like one big family.”

LeeAnn pointed to the girls’ “Natural love of running, a strong desire to compete well and a desire to have fun as close friends” as keys to success. “The combination of that as well as their humble, disciplined character made working with the girls enjoyable to say the least,” she said.

The team took a calm approach into meets said Clare. While other teams chanted pre-race cheers, the Lady Knights prayed the Hail Mary.

The coaches sought out tough competition throughout the season. Both the girls and boys teams regularly ran against Division 1 and 2 teams. The girls only second place finish all season was to Division 1 Neenah High School. They defeated Wausau East, the 2009 and 2010 Division 1 state champions.

“(The coaches) wanted to get us into meets with more people because at state there are a lot of people,” said Clare. “Also meets with better competition so there is someone there to push us every step of the way.”

The state roster included junior Rachel Weber and sophomore Chloe Kubasta, who finished 102nd and 118th respectively. The entire team returns next season, so expectations will be high for a repeat.

“It’s exciting with all the girls returning next year as well as those coming to us as freshman,” said LeeAnn, the 2010 Wisconsin girls cross country coach of the year. “It also presents a challenge as few teams repeat the following season. We’d like to be among the few.”

Next year can wait for the team as they enjoy the 2010 title. Keller said that it is exciting to see the championship trophy on display at school.

“It’s really big and really heavy too,” she said. “It barely fits in the space.”

The Lourdes boys cross country team finished tied for eighth place in Division 3 at the 2010 WIAA state meet. Senior D.T. McDonald, brother of Clare and Maeve, finished seventh individually. The season marked the fifth straight trip to state for the Knights. The team has won the Trailways Conference championship four out of the last five years.

McDonald, the 2010 boys’ conference cross country runner of the year, said he was a bit disappointed in the end results at state.

“We were ranked in the top two, top three all season long,” he said. “A number of things just didn’t go our way.

“I’m personally a little disappointed,” he added. “In the race I went for the win. I just didn’t get it and kind of fell off. Obviously, I wanted to get the win, but it just didn’t happen.”

The boys’ team dealt with its own adversity during the season. Senior Matt Schettle spent more than a week in the hospital suffering from a virus, which was deflating to the team,” said McDonald, who hopes to compete in cross country in college.

McDonald said that it was “really cool” to see the girls capture state, and he is proud to have contributed to the entire program’s success.

“We’ve definitely got a good thing going,” he said. “I’m glad that I can say that I was a part of it.”