GREEN BAY — Bobbie Lison remembers the guilt she felt as a young single mother at Christmas. Even working two jobs could not make her children’s wish lists to Santa come true. “You’re just kind of like, ‘This is supposed to be a joyful time and it’s not,'” recalled Lison.

Because of her own struggles with poverty, Lison said her work is more than a job. 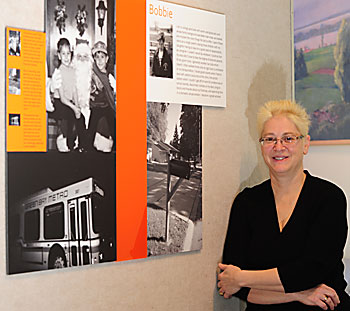 Bobbie Lison, operations manager for Catholic Charities in the Diocese of Green Bay, stands next to a photo exhibit she created that displays images she says reflect her experiences of poverty. The exhibit, “Images of Hope,” is on display at the Neville Public Museum in Green Bay. (Sam Lucero | The Compass)

“It’s very personal for me and I’m very passionate about trying to solve some of these things,” she said.

Lison’s latest project is a photography exhibit now on display at the Neville Public Museum. Titled, “Our Hidden Community: Images of Hope,” the exhibit shares the stories of eight people, including Lison, who have experienced poverty.

The exhibit is a project of Seeds of Hope, a community action group started by Green Bay area charitable agencies, including Catholic Charities.

“We wanted to bring about a call to action to actually have people involved in solving or reducing poverty,” said Lison. “We felt we had to make the community aware that poverty does exist. It’s just not very visible.”

More than just telling stories, Lison said the exhibit shows poverty — through the lens of people who know what it’s like. Last spring, Seeds of Hope handed out disposable cameras to 12 residents of Green Bay who work for or are assisted by local agencies. Of the 12, eight were chosen to be part of the exhibit.

“We gave cameras out to people and said, ‘Use this camera to tell us about what poverty looks like to you or about the struggles you have in daily life,'” said Lison. “Then we asked them to create their own short biography and to do the captions for the photos we chose.”

The photos, captions and biographies add up to powerful stories of people who struggle to feed their families, pay bills and avoid housing eviction. Viewers learn that many people face these issues, but do so quietly, said Lison.

“If you looked at me back then … people would have no idea I was living in poverty,” Lison said. “And that’s what we’re trying to say: It could be your next-door neighbor … and they won’t tell you their struggles because they are proud.”

“It wasn’t until after I was on my own, had been married and had a child,” she said, explaining how she fell into poverty. “That marriage didn’t work out and then I ended up in a second marriage that was an abusive relationship. So I had three kids and basically I was a single parent for 15 years.”

Lison said support systems, such as child support, were not in place to help her and she did not want to ask for assistance. “There were many times when I worked two or three jobs because I was very proud,” she said. “I tried not to rely on assistance. I felt that there were people worse off and I always wanted to make sure that my kids were not going to have some kind of stigma.”

Lison’s exhibit features three photos, including one she did not take. It’s a photo of her young sons, Colin and Mc-Kenzie, sitting on Santa’s lap. In the caption, she explains the photo’s significance.

“Christmas cheer? Visits to Santa with the wish lists came with a sense of dread,” wrote Lison. “How could I make some of those wishes come true? Guilt over working so much and being a single parent sometimes equaled bad financial choices.”

Lison’s other two photos show a mailbox and a bus.

“If you’ve ever traveled on a bus in the winter, it’s tough,” said Lison. “The buses in Green Bay only run once an hour so you can spend lots of time waiting on the bus.” She added that bus rides also provided a “source of entertainment” for her family in the summer months.

The third photo of the mailbox represented bill collectors.

“I had to do things like, when the landlord came, hide in the basement because I didn’t know what to tell him about the rent,” she said. “There were lots of struggles but eventually with the mentoring help of others, I was able to get through that. If things had been in place, if child support had come when it was supposed to or insurance coverage that was supposed to be provided was, life wouldn’t have been wonderful but I could have made it.”

Lison said that she sees a lot of her experiences in the clients she works with at Catholic Charities. By sharing her story through photos, she hopes she can somehow help them find their way out of poverty.

“I see my story a lot of times in my clients, so those are things that I want to be able to make a difference on,” she said. “Those are the things I’m passionate about.”

Lison encourages individuals and companies to join Seeds of Hope. “We believe that to solve poverty, it has to be a community project,” she said. “It takes our neighbors, it takes government, it takes businesses, it takes human service agencies and it takes people who may have been in struggles. Our goal is to get people from all of those areas on this committee to do that.”

“Images of Hope” is a traveling exhibit. Lison said Seeds of Hope is looking for churches, schools and business that might be interested in hosting the exhibit. For information on joining Seeds of Hope or hosting the photo exhibit, contact Bobbie Lison at Catholic Charities, (920) 272-8234 or by e-mail: [email protected]