The 40-year-old Maryknoll sister was tragically killed during a flash flood just five months after arriving — an answer to a plea for help from Archbishop Oscar Romero. Ironically, the gentle priest was murdered the day she arrived in the country, another victim of ongoing religious persecution. 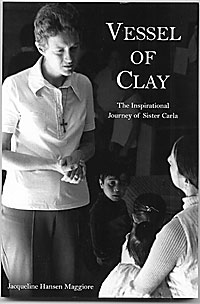 The cover of “Vessel of Clay: The Inspirational Journey of Sister Carla,” written by Jacqueline Hansen Maggiore.

Her desire to work with the “poor ole beat-up people,” as she referred to them, began as a young girl living in Appleton. She and Jacqueline Hansen Maggiore became fast friends in kindergarten and stuck together throughout their years at St. Mary Grade School, Appleton High School and Marquette University.

Recently, Maggiore, of Glendale, and member of Gesu Parish in Milwaukee, released a book on the life and journey of her best friend, Sr. Carla (Carol) Piette, who began working as a missionary in 1964 in Chile.

“I admired her so much for her courage and in what she was doing,” said Maggiore, 71. “She spent 15 years in Chile and while she was there, I paid close attention to the news — in 1973 there was a very repressive military in Chile — from the letters I got from her. She told me later just how much everyone was being persecuted, especially the poor. She was living in dangerous times and working hard to protect the poor and the people in her community.”

Needing a respite from working in gritty neighborhoods, where it was not uncommon to see people beaten, tortured and starving, Sr. Carla returned to Wisconsin in 1976 for a 30-day Ignatian retreat. During her stint in Wisconsin, the two friends visited for the last time.

“She told me what was really going on over there and I worried more about her than I had before,” admitted Maggiore. “But then when she volunteered to go to San Salvador with several other Maryknoll sisters to help Archbishop Romero, I was more concerned than ever about her welfare.”

Nearly the same moment that Sr. Carla’s plane touched down in the violent country, Archbishop Romero was murdered while celebrating Mass. His spilled blood merged with the precious blood of the chalice, soaking the altar. Through letters smuggled out of the country, Maggiore learned what her friend was up against.

“Priests were threatened, expelled, and murdered,” she said. “Catechists were killed and ordinary people were murdered for no reason. Mutilated bodies were lying along the roads and whole villages were massacred. Hostility toward the church was virulent and it was dangerous to even be seen talking with any religious.”

Still trying to retain her sense of humor in an untenable situation, Sr. Carla served the emergency refugee team by driving food and medical supplies to women and children. Despite her own vulnerabilities, Sr. Carla prayed to God for the strength to continue this mission.

“She was always on my mind, and I just admired her so much,” said Maggiore. “I still can’t believe that after all she did, she would die in a flash flood while pushing Sr. Ita Ford, another Maryknoll sister to safety.”

Tragically, Sr. Ita was one of four missionary women murdered a few months later. As the world remembers the 30th anniversary of the death of these four women, Sr. Carla is also recognized and revered as the “Martyr of Charity” for her selfless nature.

“I thought it was time the world knew about Sr. Carla,” said Maggiore. “After my husband passed away in 2004, I began looking through my letters from Sr. Carla and realized that her letters held a powerful story that needed to be told.

“The title, ‘Vessels of Clay,’ came through her letters to me when she said that she was a weak vessel and instrument of the Lord,” Maggiore explained. “Her mantra was, ‘The Lord is calling me to be poor with his poor,’ and she fully lived this belief. All of us can learn from Carla’s example of overcoming her own emotional frailties to serve others with compassion, courage and humor. Wherever we are planted in our own lives, we, too, can draw inspiration.”