The pope’s message, titled “Religious Freedom, the Path to Peace,” did not deter terrorists in Egypt from detonating a bomb outside a Coptic Orthodox Church in Alexandria Jan. 1 as worshippers were leaving a service. The blast killed 25 people and injured many others. 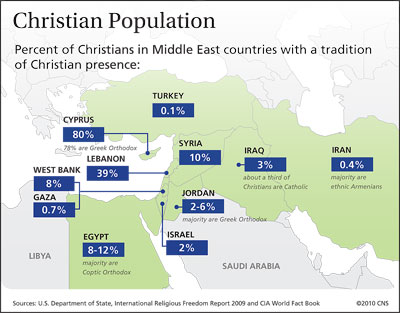 Following the attack in Egypt, Pope Benedict called the bombing a “despicable gesture of death.” Acknowledging the string of attacks against Christians, he said the incident was part of a “strategy of violence that targets Christians.”

Just days before the pope released his World Day of Peace message, other acts of violence against Christians took place around the world.

• A Catholic chapel on the Filipino island of Jolo was bombed during Christmas Mass, injuring the local priest and eight others.

• In Baghdad, at least 13 people were wounded Dec. 30 when bombs were planted close to several Christian homes. The practice of planting bombs near homes is said to be a strategy to force Iraqi Christians to leave the country.

Coptic Catholic Church leaders in Egypt told the Vatican newspaper, L’Osservatore Romano, Jan. 3 that the New Year’s Day bombing was the result of a growing Muslim fundamentalist movement in the country. “For 40 years in Egypt, there has been a creeping Islamization that pervades every area of society,” said Coptic Auxiliary Bishop Kamal Fahim Awad Hanna.

Bishop Hanna offered what might be one of the best responses to violence against Mideast Christians: Begin teaching tolerance in elementary schools.

“At present, there is no effort on the part of teachers to impart the concept of unity in the respect of difference,” Bishop Hanna told the Vatican newspaper.

Regardless of one’s faith conviction, religious fundamentalism is a dangerous trend because it clouds the concept of unity that Bishop Hanna promotes. Dialogue between religious communities is the only way to prevent the spread of fundamentalism.

The Jan. 1 Egyptian church bombing is not a hopeful sign of religious harmony in the Middle East for 2011. But what can we do here in Wisconsin to make a difference? First, offer prayer intentions for those suffering persecution. Secondly, treat religious minorities in our community with the respect that we ask for our Christian brothers and sisters around the world.