“I don’t remember a time I didn’t want to be a teacher,” Scheuer told The Compass. “As a child I played school a lot (with her siblings) and I was always the teacher.” 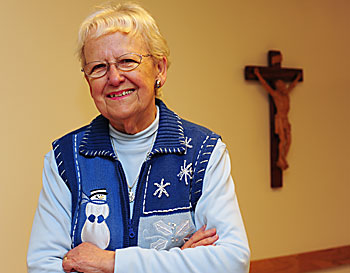 Her love of teaching was passed on to four of her eight children: Jim Scheuer is a band teacher at Owen-Withee High School; Jean Hopka teaches music at St. Francis Assisi School in Manitowoc; Rita Lee is a teacher at St. Mary School in Tomahawk; and Marie Steeber is director of religious education at Holy Cross Parish in Mishicot.

In 2002, three years after retiring, Mary’s husband, Frank, passed away. That year she decided to return to the classroom — this time as a catechist. Since 2002 she has been preparing second graders for first reconciliation and first Eucharist. She also volunteered as a teacher’s aide at Holy Cross School from 2002 to 2007.

While the classroom has brought joy to Scheuer’s life, the church has given it meaning. Through her involvement at Holy Cross Parish, Scheuer has found ways to express her faith in God and love for the sacraments. Following in her parents’ footsteps (George and Marcella Haen were active members at St. Mary Parish in Greenleaf), Scheuer has answered the call to service many times over.

In recent years, she has served as president of the parish’s altar society, pastoral council, home and school association and board of education. It was through the altar society that she became acquainted with the Diocesan Council of Catholic Women. Today Scheuer serves as DCCW president.

“I like to know what’s going on,” Scheuer said in response to why she joined the DCCW. “You can’t hear about it unless you’re active in it.”

According to Scheuer, the DCCW offers Catholic women opportunities to grow in their faith while serving their parish communities.

“We sponsor the Marian Day every year in May. It has grown from less than 100 women to about 400,” said Scheuer. “It’s a day of spirituality and I think the ladies are looking for that.”

Recruiting younger women to join the DCCW is a constant challenge, Scheuer acknowledged, but added that is the case for most volunteer groups. Between work and raising children, most women do not have time to attend meetings or conferences, she said. It is up to groups like the DCCW to work around their schedules, added Scheuer.

“All of our meetings are on Saturday, rather than weekdays” to allow more women to attend, she said.

She invites Catholic women to consider joining the DCCW and attend gatherings whenever possible. “There is camaraderie with other women in the same situations. You have someone to discuss problems with,” she said.

The DCCW has charitable projects such as the Lick Family Violence program. Similar to the Knights of Columbus Tootsie Roll project, DCCW members hand out suckers at church once a year to raise funds and awareness for domestic abuse. During their annual convention, members contribute donations to the Salvatorian Mission Warehouse in New Holstein.

On March 19, Scheuer will represent the DCCW when she participates in the annual St. Baldrick’s fund-raiser for childhood cancer at Green Bay’s Preble High School. Scheuer will have her head shaved with other participants, including her son Dave and grandson Jimmy Lee. Pledges can be made on her behalf by visiting www.stbaldricks.org.

Scheuer said young women can make an impact on their communities by becoming part of the DCCW. It’s one way for women to live out their baptismal calling, “which is what Christ asked his apostles to do.”

“He didn’t go out looking for the best educated or people with a lot of money,” she said. “He looked for ordinary people — fishermen. There is a place for you” in the Diocesan Council of Catholic Women.

To learn more about the DCCW, contact Scheuer at [email protected]