“Jim explained that if we could work on getting a bus filled, we could have a ‘Catholic’ bus,” said Pallini. 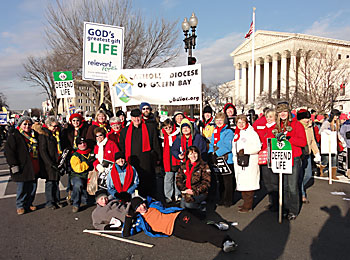 Bishop David Ricken and pilgrims from the Diocese of Green Bay pose for a picture in front of the Supreme Court building at the end of the 2011 March for Life held Jan. 24 in Washington, D.C. (Jennifer C. Lee | For The Compass)

“With help from our task force of Sara Busher (St. Terese Parish, Appleton), Dawn Shaw (St. Francis Xavier Cathedral, Green Bay) and Cate Gard (St. John the Baptist Parish, Howard) … we were able to coordinate our efforts and get this trip going,” she said. A second bus was also half filled with pilgrims from the Stevens Point area, who met up with the group of 56 at the hotel each night.

Fr. Andrew Kysely of St. Paul Parish in Combined Locks accompanied the group as chaplain and celebrated Mass on Sunday evening at the group’s hotel, as well as on Monday and Tuesday mornings.

The Lamers “Catholic Bus” was one of several local groups traveling to the nation’s capital for the annual March for Life on Jan. 24. Fifteen youth and four chaperones were led by Fr. Mark Vander Steeg of St. Mary Parish in Greenville, as well as several other smaller groups. The largest group, referred to as “the Xavier Group,” was led by Mary Beth Meehl of Appleton.

Meehl began organizing the annual pilgrimage in 2006 with 15 youth. This year, her group was comprised of 108 pilgrims traveling by coach bus as well as by air: 44 youth from Xavier High School, eight from Lourdes Academy in Oshkosh, five from Notre Dame Academy in Green Bay, six from Roncalli in Manitowoc, eight from St. Mary Central in Neenah/Menasha, and 20 home schooled or public high school students.

“Our pilgrimage is organized as a retreat experience,” said Meehl. “The march is a part of the pilgrimage. Our goal is to educate the youth that they don’t have to be part of this culture of death, but are called to build the culture of life … many come back after a deep conversion experience. It is very beautiful.”

Bishop David L. Ricken was present for the youth rally and Mass at the Verizon Center Monday morning. Later he met for lunch with the youth from Greenville, marched with the Lamers group, and in the evening met the Xavier youth for dinner, prayer and sacrament of penance at a local Catholic church. It was the first time he had attended the March for Life.

“I’m so impressed by the numbers of young people,” he told The Compass. “It is incredible. It looks like our youth are going to take hold of the pro-life effort and I think they’re going to be able to make a change.”

Torey Gostas, 15, of Xavier High School, echoed Bishop Ricken’s sentiment. “I decided to come on this trip because I wanted to stand up for what I believe in with thousands of other people. I believe our generation is the one to end abortion in America.”

Attendance at this year’s march was somewhere between 100,000 and 400,000. Participants braved freezing temperatures and unexpected traffic issues as a large water main broke on the Beltway Monday morning.

The Lamers group wore red scarves and carried signs for the Catholic Diocese of Green Bay and Relevant Radio, as well as one saying, “March On Wisconsin … For Life.” The Xavier youth group wore red and black striped hats, and the Greenville group wore blue hats.

During the rally before the march, Pastor Luke Robinson of Quinn Chapel African Methodist Episcopal Church gave a passionate plea to black leaders in particular. “When it comes to the African American community in New York City, out of every 100 pregnancies, 60 children die and 40 live,” he said. “Mr. President, that’s a tragedy! Where is Jesse Jackson? Where is Al Sharpton? Where is the NAACP? Where is the Black Congressional Caucus? And where, for God’s sake, is the voice of the African American church?”

Christina Pallini was equally as passionate about every person’s duty to stand up against moral injustice. “We have had legal abortion since 1973,” she said. “Over 53 million people have been deprived of life, and the dignity and sacredness of all life has just been deteriorating since.

“Now is a great time to join the effort to celebrate, defend and protect all human life, from fertilization until natural death,” noted Pallini. “God is the giver of life and we are just following the mission of what God is asking us to do.”