Valentyn, whose home parish is St. John Nepomucene in Little Chute, can relate to the lack of understanding about vocations by most high school students. He said that he was once in their shoes. 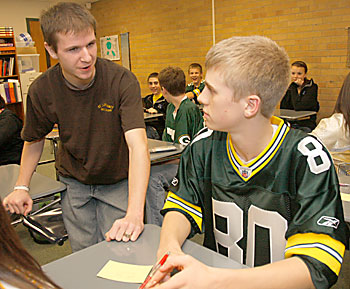 Tim Martens, a seminarian from Shawano, speaks with Mike Nuss during theology class at Notre Dame Academy in Green Bay Jan. 7. Ten seminarians visited diocesan high schools and religious education programs the first week of January as part of the second Annual Winter Excursion of Seminarians On a Mission of Evangelization (AWESOME) event. (Rick Evans | For The Compass)

“I know that I wasn’t aware that I was really supposed to pray about and discern what God wanted me to do with my life,” he said. “The approach is really to just help them become aware that everyone has a vocation and ways to really embrace that through discernment and prayer.”

The seminarians opened with a game to get the students out of their seats. They shared how the game applied to vocations, talked about vocations and one of the seminarians shared his personal vocation story. Students were then broken into small groups.

“The small groups are pretty informal,” said Valentyn. “If they don’t have any questions we just kind of hang out with them so they can see that we are normal guys. The campus ministers and contacts at the schools were really great about getting us into the classrooms.”

“I like it that way,” he said. “We don’t want to appear as if we are just getting up there and preaching in front of them the whole time. We want to break it down and show them that seminarians are real people.”

“It’s easier to speak in a small group,” he said. “It makes it more comfortable. The small group portion is more about getting to know the kids, the little that we can.”

Rappl praised the questions asked by the students. He said that it gave the seminarians a chance to practice what they’ve been learning.

“One kid was wondering about free will and determinism,” he said. “It was really cool. It’s been a great time. I’ve really enjoyed myself.”

The seminarians spent the weekend prior to their school visits in retreat with Fr. Quinn Mann at St. Joseph Formation Center in Baileys Harbor. They spent Sunday evening with Fr. Luke Strand at St. Mary Parish in Fond du Lac. Fr. Daniel Schuster, diocesan vocations director, was also present throughout. Visits were made to all six diocesan high schools. The seminarians also spent time with middle school students at St. John Neumann School in Oshkosh.

Valentyn founded AWESOME in the fall of 2009, his first year at seminary.

“Being in seminary was not the easiest thing,” he said. “Being away from direct ministry and being more focused on studies can be tough. It kind of just fell in my lap during adoration one morning to actually get out to the schools and evangelize to the high school students.”

Valentyn prayed about his idea before sharing it with the other diocesan seminarians at St. John Vianney. He then proposed it to Fr. Tom Long, vocations director at the time, who supported the program.

Rappl said that he is thankful for the time with the other seminarians.

“It’s really important for extended periods of time away from seminary to be able to be with your brothers in Christ, to live with them and to minister with them,” he said. “What we are doing this week is really something that I think will be carried into our priesthood if, God willing, we’re ordained. I think community is meant to sustain a diocesan priest, his community, his fraternity that he has with his brother priests.”

Valentyn expects AWESOME to continue. Spending a week visiting with young people is not a sacrifice when you have a month long break, he said. While it can be difficult to determine the effect their visits have on the students, the seminarians trust that they are making a difference.

“God is asking us to do this, so you have to imagine there are going to be some fruits from it,” said Valentyn.