Seminarian’s parents have mission to church

“Seven of our children are boys, so you think to yourself, out of seven boys there is a possibility. Young people haven’t been geared in that direction in recent years. We were certainly open to it.” 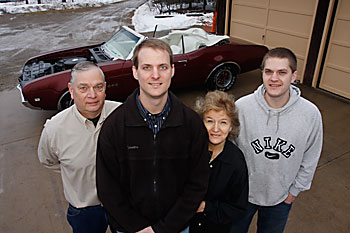 Michael Warden, second from left, is a diocesan seminarian at Mundelein University. Here, he is shown at home in Flintville for New Year’s with his parents, Joe and Karen, and his brother, Dan. Behind them is the 1968 Olds Cutlass convertible that Michael and Joe restored. The car belonged to Michael’s uncle. (Rick Evans | For The Compass)

Michael is now in his second year at Mundelein Seminary in Illinois. He spent his first four years at Pontifical College Josephinum in Columbus, Ohio.

“It’s amazing how fast that time goes by,” said Karen. “It doesn’t seem like it was that long ago that he told us.”

Michael, a graduate of Pulaski High School, was working at a countertop business and part-time in construction when he decided to make a change.

“He wanted to start his own business,” said Joe. “He was going to do cabinets and home remodeling. He is really handy. He will do anything, electrical, plumbing, fixing cars.”

Starting a business gave way to discernment as a seminarian. The priesthood had been on his mind for a year and a half.

“He was really serious about it,” said Joe, a retired railroad worker. “I was in the seminary for high school. I went four years to St. Bonaventure by Racine to please my mother. When Mike went, she was thrilled.”

Joe added that his mother, who died two years ago, was very dedicated to supporting priests by sending cards and financial donations.

The Wardens tried to serve as good models of faith for their children. Joe grew up in a strong Catholic family of 10 children. Karen describes her family upbringing as dysfunctional.

“For some reason, I was blessed that God kept me on focus and my faith was always so important to me,” she said. “I found a lot of help and strength. I think it gives you the ability to understand so many situations in life and what people are dealing with because you’ve been there. To me, it’s a great blessing to be given that type of faith and to accept it. It’s God doing it.”

The family belonged to Ss. Edward and Isidore Parish in Flintville before moving to Assumption BVM Parish in Pulaski so the children could attend Catholic school. Karen taught religious education at the parish for 24 years and all the boys were altar servers.

“Every one of them still goes to church,” said Joe. “They (all 10 children) are involved in their church. All are Catholics who attend Mass.”

The second Sunday of each month, Joe and Karen host all family members who live in the area for Cenacles of Life, prayer groups that pray two rosaries (ten mysteries) to further the pro-life movement.

“They all come over, we pray the rosary and do the Cenacle work and have a meal,” said Joe. “Most of the time, all of them are here. We are going to have to rent a hall pretty soon.”

“Some of the little ones sit on the floor,” said Karen. “Everyone is quiet. It’s pretty cool.”

Having family members who are engaged in their faith provides support for Michael, added Karen.

When he is home from seminary, Michael and Don, the oldest of the 10, usually get together for faith discussions and socialization. Karen also enjoys learning about her son’s faith studies.

“When he was at Josephinum, we talked about philosophy,” she said. “It’s fascinating, now that he’s in theology. I just enjoy having those talks because he is sharing so much that he’s learning.”

While the family has provided a foundation in the Catholic faith, Joe and Karen also point to Fr. Tom Farrell, now serving as pastor of St. Pius X Parish in Appleton, as a strong influence on their son’s vocation. Michael’s home parish is Ss. Peter and Paul in Green Bay, where Fr. Farrell previously served as pastor.

“Mike really looked up to him and saw in him a priest who really believed in the faith of the church and following it,” said Karen. “He saw that commitment there and that was a big help for him.”

Michael became close with Fr. Farrell while working on building the eucharistic adoration chapel at the parish, she added.

Joe, a cousin of Fr. Ralph Merkatoris, joked that his son will save his parish some money because of his many skills.

“I hated to lose him because he was so handy here,” Joe said of his son. “He is rebuilding his uncle’s old car, a ’68 Olds Cutlass convertible. He took it right down to the frame to rebuild it. When Mike was at Josephinum and the janitor was busy, he would tell people to ‘call Mike, he will do it for you.'”

The Wardens understand that there is no guarantee of ordination when your son is discerning whether he will become a priest.

“He did mention once, early on, ‘What if I didn’t go through with this?’ I said, ‘You know, Michael, the most important thing is for you to do God’s will.’ He seems focused, I never sensed that he had a doubt,” said Karen.

There is a local seminarian parents’ group that gathers several times throughout the year to provide support and fellowship. A fish fry was held in November in Darboy. A Christmas event was also held.

“You get to meet new people coming in and renew your relationships,” said Joe of the parents’ group.

And what advice would the Wardens share with other parents whose children are interested in the priesthood or in religious life?

“Pray and be open,” said Karen. “Let them know that you will be very supportive.”

“Talk about your faith,” said Joe. “(Michael) knew that we were serious about our faith.”