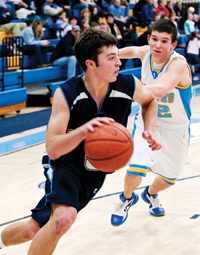 Ben Stelzer of Roncalli (Manitowoc) drives to the hoop against Richard Vanden Branden of St. Mary Central in an Olympian Conference game. (Kasi Koshollek | For The Compass)

Scouting reports, including WisSports.net, rank Stelzer in the top 15 among senior prep players in the state and laud his shooting ability as his top strength. The reigning conference player of the year takes pride in being more than an outstanding shooter.

“I’ll take the compliment,” said Stelzer, “but there are other parts of the game like being a good leader, playing defense and making hustle plays.”

“Ben is a good passer, a very good ball handler and helps out on the boards,” said Joe Rux, Roncalli boys’ basketball coach, “but his calling card is putting the ball in the hole. He’s figured out that while sometimes it’s good to get everyone involved offensively; we need him to hunt for his shot first because of his ability to score.”

“I go in and see how (the game) unfolds, but I know that I have to be aggressive,” said Stelzer.

Rux added that Stelzer has developed as a leader.

“We ask our seniors to not just lead by example, but to be vocal leaders,” he said. “When (Stelzer) was a freshman, he was a real quiet kid on the court. He’s really grown into that leadership role.”

Stelzer is more than a basketball player. He started at quarterback for the Jets the last three seasons and earned all-conference football honors this past fall. As a freshman, he advanced to state in doubles tennis along with Marc Schrimpf. Stelzer played AAU basketball the past two springs, but is considering playing baseball for Roncalli this year.

“Growing up around Roncalli you picture yourself playing all these sports,” said Stelzer. “You want to capitalize on all the opportunities you get. You only get four years of high school, so you want to make them the best years possible.”

Stelzer, who will play basketball on scholarship at Michigan Tech next season, carries a 3.9 grade point average. His father, John Stelzer, president at Roncalli, said that he is most proud that his son is “a person of faith and service.”

“A lot of great players come with baggage because they’ve been put on a pedestal,” said Rux. “Ben obviously doesn’t have that in his life. He’s very mature and very driven.”

“It’s important to make sure you are doing the right thing,” said Stelzer, “and being the best person you can be, the best leader.”

Stelzer, a first team all-state Division 3 selection by the Wisconsin Basketball Coaches Association and all-Olympian Conference as a sophomore and junior, appreciates the recognition he’s received, but winning is his focus.

“Individual honors are definitely nice and it shows that your work has paid off,” he said, “but I definitely wouldn’t mind trading a couple of those for a state title.”

Roncalli advanced to Madison in 2009, Stelzer’s sophomore season, but was defeated by La Crosse Aquinas in the semifinals.

“State is the big goal in the scheme of things, but you have to take it one game at a time,” said Stelzer. “(State) was definitely a great experience. I wish we would have played a little better.”

This year’s team features a strong senior class, including Mike Gresl who is averaging more than 14 points per game. Senior forward Alex Kitzerow is the team’s third leading scorer. The Jets worked hard in preparation for the season, said Stelzer, who at press time was averaging 24.5 points per game.

“All our guys know that they have to work hard,” he said. “It’s easier working in the off-season when you have five teammates with you working and pushing each other.”

Even during football season, Stelzer and his teammates worked on shooting prior to the school day. When Roncalli was eliminated from the football playoffs, they quickly turned their entire focus to basketball.

“I think we played on Saturday and we had open gym on Monday,” said Stelzer, who lists his father, who formerly coached girls’ basketball at Roncalli, and Rux as his strongest basketball influences. “That first week of open gym wasn’t all that much fun getting in (basketball) shape.”

Wherever the team finishes at season’s end, Stelzer will look back fondly at his high school basketball experience.

“The big homes games, you will never forget those, hearing the crowd and the band,” he said. “It may be more special for me because I’ve grown up around this school.

“I think they will remember me as a good player,” he added. “I would really like to go out as a good leader, maybe leave a little mark for the younger guys to strive to accomplish in the future.”