The friars granted permission for Catholic Underground to begin in northeast Wisconsin on Sept. 21, 2010. 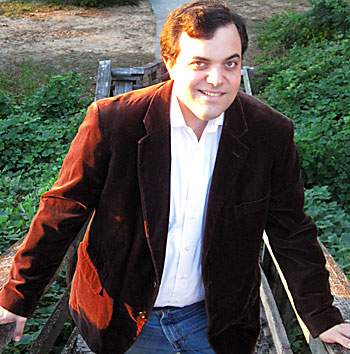 Performing live at the St. Pius X Church in Appleton March 19 is singer/songwriter Burke Ingraffia, who combines the sounds of New Orleans with the folk simplicity of the Deep South. (Submitted photo | For The Compass)

According to Elton Saunders — one of the event’s organizers, a member of Catholic Underground Green Bay/Fox Cities, and a member of St. Pius Parish — the purpose of the event is to merge the beauty and truth of contemporary culture — music, theater, poetry, film, and literature — with the good news.

Starting at 7 p.m., the first portion of the evening is eucharistic adoration, beginning with vespers (evening prayer) — the universal prayer of the church prayed by Catholics throughout the world in every time zone and in every language. A time of simple praise follows vespers. The holy hour ends with solemn benediction.

The second portion of Catholic Underground events showcases Catholic artists. Here participants experience the “new evangelization.” Saunders says that, while adoration attracts people of all ages — from high school to working professionals to mature seniors — the cultural artistry offered from one venue to another often attracts different demographic groups to varying degrees.

Saunders adds that the broad appeal of Burke Ingraffia was a natural fit for the very first Catholic Underground event in northeast Wisconsin. He compares Ingraffia’s work to Flannery O’Connor, whose writing appealed to a mass audience despite the Catholic perspective from which her stories were told.

“Burke’s musical messages resonate beautifully with Catholics, conveying relevant, on-spot messaging about divine mercy, family and the nature of love. People of all ages and all backgrounds can find something they like about his songs,” says Saunders.

The evening concludes as it began — with the prayer of the church. Compline (night prayer) offers a simple, beautiful and serene ending to the day.

With no advance registration required, admission to the March 19 event is free. Free-will offerings will be accepted to further the apostolate’s mission. For more information visit www.catholicundergroundgb.com.