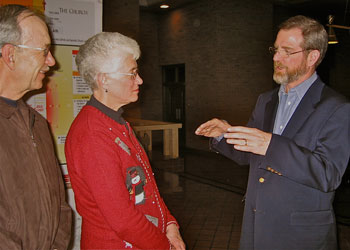 Jeff Cavins, right, a nationally recognized speaker on Bible study, visits with Al and Joan Hangartner of St. Mary Parish, Pickerel, during a break at his presentation Feb. 4 at Holy Spirit Church in Kimberly. (Tom Kelly | For The Compass)

Cavins received his master of arts degree in theology from Franciscan University of Steubenville, Ohio, with catechetical certification. He has hosted the TV program, “My Life on the Rock” on EWTN and daily radio program, “Morning Air” on Relevant Radio. In an interview with The Compass, Cavins shared a few of his insights about Bible study and his personal journey of faith.

Q: What made you leave the Catholic Church?

A: I was sort of an average American Catholic boy in that I never really read the Bible much. I’d never been to a class that explained what was happening in the Mass, so there I was experiencing a general ignorance — one of the reasons I ended up leaving.

I didn’t believe there were many answers in the church, which is not true, but no one was providing any answers for me. Nobody ever taught me anything about the Mass. In fact, it never even became a question of wanting to know. We were Catholic and this was what we did. We went to Mass every week and we went to confession occasionally and that was kind of it.

I had a fairly profound conversion experience at age 18 that led me to a Bible college in Texas. About three years later I left the Catholic Church. I was frustrated with it. My parents didn’t understand this new relationship that I had with the Lord.

A: Even today I use the word “conversion” but it’s still sort of a foreign word to me in terms of my vocabulary. It’s a very Catholic word. You won’t hear Protestants talk about that. They’ll use words like “saved” and “born again” and “got right with God” and statements like that, while Catholics talk about “ongoing conversion.” I would say my eyes were opened up.

There’s definitely something happening today with the new evangelization — the response of the church to John Paul II, and now with Verbum Domini there’s definitely a movement toward being biblically literate and entering into a dialogue with God.

That’s our generation, and the more people I talk to the more I realize that there are a lot of people that, when I tell my story will come up to me later and say, ‘wow, that’s completely my story.'”

Q: What’s at the core of your message as you travel, teaching about the Bible?

A: It’s the story of an average American Catholic boy who wanted to find God in a deeper way, didn’t find what was right under his nose in the Catholic Church, and went outside of the church and found it. And then, the deeper I went, the more it led me back home where I began.

Q: Was your conversion passive or did it require action on your part?

A: Leaving the Catholic Church was a slow and rather passive thing. I didn’t intend to do that. It kind of all came to a head [when I] realized I had nothing in common with people who were not interested in reading the Bible, did not have a relationship with God, and were not interested in sharing anything with anybody else. It appeared to me to be a dead religion.

(By contrast), coming back to the Catholic Church was incredibly active. I knew that there was change coming. I was studying and very interested in the early church fathers, liturgy of the early church, and I was thoroughly convinced that the church I was pastoring at the time was not a New Testament based model of what I was learning about the New

Testament church. So it was a matter of, “What am I going to do with this?” I first started pursuing the Anglican Church, and that ended up leading me all the way back to the Catholic Church.

Q: How can the Bible bring us closer to God?

A: It brings us closer to God in that it’s the heart of God. It’s his message. It’s his will. He writes to us for relationship. So if we will read it in the same Spirit that it was written, and read it by the power of the Holy Spirit to guide, lead and direct us in the church, then we’re going to come to know the heart of God.

Then we have a decision to make as far as our response — are we going to respond favorably in obedience, or are we going to be obstinate by not responding? To not respond to the Word of God is the hindrance to understanding because it’s in the responding that we really come to know, and it’s in the doing of his Word that we come to really know him, and that’s what our response is really supposed to be.

Q: How do you, personally, find the Bible a source of deeper inspiration?

A: College was the first time I had read the Bible, and I read it with the idea that God was trying to speak to me rather than just a history book. When you read the Bible as a Catholic, you’re not reading it alone. It wasn’t put together alone. It’s not meant to be interpreted alone. It’s not to be lived out alone. We are made for community, like the Trinity — Father, Son and Holy Spirit — is a community of persons. It’s a family, not a solitude, and we are called to family. So, when we approach the Word of God — Scripture and sacred tradition — we are listening to a family speak, not only in the initial reading of it, but in the interpretation of it and in the “living out” of it.

That means the catechism, the church fathers, the letters of the popes — all of these are very important in understanding what God is saying to us. So, in a sense, we stand on the shoulders of giants, to get a better listen and a better view of God. Even Peter says in his epistles that no revelation is of private interpretation, yet you’ll see many people today who will pick up the Bible and they’ll act as though it’s just them and God in his Word, and that’s it. But clearly, with over 30,000 different denominations by U.S. Census Bureau definition, the approach of “just you and God” results in a multitude of interpretations and that doesn’t speak of family to me.

Q: What advice would you give to the person who is feeling spiritually empty and searching to fill that emptiness by turning to the Bible?

A: When they pick up the Bible, most people think that it’s just a book, like “Gone With the Wind,” so they start reading Genesis and hope to read all the way to Revelation, and then sit back and say, wow, that was a great story.

But that’s not what happens. In true American fashion, they’ll usually start off in January with Genesis and by the time they get to March, they give up and quit in the middle of Leviticus because they don’t know what’s going on.

A system that guides them will show the basic narrative of salvation history — the story line. You start with that, reading it through the eyes of the church and its catechism with its guidelines to interpretation. That’s the key — learning how to read the Bible as a narrative and a story, rather than just a book here and a book there.

When you don’t understand the over-arching story, you have the tendency to just approach the book as a sort of magic book, like Mao’s little red book or something with certain passages that we like and pull out to back up whatever agenda we have going forward.

That’s not how the Bible was intended to be read or used. It’s a story. It’s God’s story. It’s salvation history, and it’s given to God’s family. The authentic interpreters of it are the (church) magisterium — the bishops in union with the holy fathers. Technically, you alone can’t come to all these conclusions. We need the church.

Q: How can readers know a particular study guide is in alignment with authentic interpretations?

A: The imprimatur (from Latin “let it be printed”) is very important to us. It means the study material has been submitted to a Catholic bishop, and his staff has reviewed and concluded that the study [material] is free from errors as it pertains to faith and morals. It is not an endorsement but rather a declaration of being free from error. It shows that the materials do not stand on their own — that the study [material] is responsible to the church as far as interpretation and they way we go about studying the Bible goes. If we’re going to get the maximum out of the Bible, then we need that from the church, especially when dealing with things like the Scriptures.