McDonald kept the crowd of close to 300 people rolling with her comparisons of life in California versus Wisconsin, recollections about her travels around the globe and tales of being Catholic. 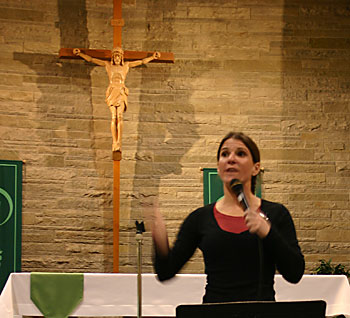 Judy McDonald, a comedian from California who specializes in wholesome comedy, entertains nearly 300 people in Sturgeon Bay Jan. 29. (Eddie O’Neill | For The Compass)

“My comedy is just my observations,” McDonald told The Compass. “Since I am Catholic and my faith is an essential part of my life, that’s what naturally comes out in my comedy.”

She says her career as a standup comedian began in 1994 when she was a freshman at the University of San Diego.

“I went on stage for the first time when a comedian didn’t show up for a show and I was hooked. I think at the time I was too young and dumb to know that people are supposed to be scared to do standup. For me, it was a gift to find an outlet or a place to express my voice.”

McDonald would go on to do comedy as a side job, performing in clubs and corporate events for more than 10 years. She went full time in 2005. Her numerous performances over the years have included an appearance on the Dennis Miller show, the Weather Channel and opening for widely known comedians such as Paula Poundstone and Mark Curry.

During her days of working out in the comedy clubs she noted that she stood out not because she was more talented but because she was one of the few comedians who kept their material clean.

“My comedy has not changed much in the last 16 years,” McDonald said. “If I was an accountant, I would be a Catholic accountant.”

Today, the majority of her shows are for Catholic events and audiences around the globe. With her accounts about going to confession to funny stories about visiting Rome, McDonald said that she is certain that performing is her manner of evangelization.

“I honestly believe we are all called to evangelize no matter what our career. I just have comedy as my vehicle to get me there. God used fisherman and tax collectors,” she explained. “Why not comedians? Comedy breaks barriers and is a great equalizer. It relaxes people and allows them to be more open to the Good News.”

Sarah Gavin, who serves as the Life Teen coordinator for the Sturgeon Bay area, said that that comedy night at Corpus Christi was a success. She was responsible for inviting McDonald to perform. Gavin first learned about McDonald around seven years ago at a Life Teen conference where she was speaking.

“I couldn’t get over how funny, yet appropriate she was,” recalled Gavin. She spoke with faith and energy and I was drawn to that. So often our world has degrading and nasty humor and Judy proves it’s possible to have uplifting humor.”

McDonald credits her success as a comedian and entertainer as simply a gift from God. She said that her comedy and having people laugh with her has a bonding effect and it is then that she can begin to share what God is doing in her own life.

“God knew what he was doing when he called me into this ministry. I am constantly receiving more than I give while out on the road,” she said. “You could say that the Holy Spirit is my ghost writer. My material is from my life and what I observe and I’m just reporting back. God keeps my material fresh for me.”

After more than an hour of non-stop smiles and leaving those in attendance in stiches, McDonald ended the night by thanking the audience for their participation and gave them one last poignant quip.

“I want to thank you and I ask that you continue to support the youth ministry here, because they are the ones who will pick your nursing homes eventually,” she noted. “Thank you and good night.”