The night expects to see more than 650 people fill the parish’s school gym. Pete Kirschling, 57, serves as treasurer of the men’s club. He has been a member since 1990. 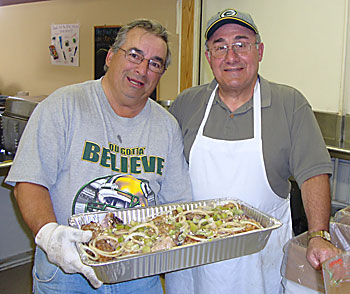 “The scope has grown well beyond the parish,” Kirschling told The Compass. “In the early years it was a lot of parishioners that came to help support the parish but it has really grown exponentially over the years. Word has gotten out that you can get an all-you-can-eat meal for $15. Plus there are door prizes and auctions and different types of raffles throughout the night. There are a lot of things to keep people entertained.”

Kirschling added that there will be around 125 auction items available this year, with 40 or so of those items being offered in a live auction and the rest being auctioned off silently.

When it comes to what meat will be offered, Rob Atwood, club president, said most of the game for the night is donated by the group’s members. Atwood, 48, the father of two teens, is in his fifth year as president. He has nothing but the highest respect for club members.

“All of the members contribute to this big event in one way or another,” Atwood said. “This group of men is made up of team players. They truly have the parish, school and community at heart.”

Last year the Wild Game Feed raised close to $25,000. The money went to a number of projects which included the St. Matthew building and grounds fund, the school’s band program, as well as area organizations such as St. John’s Homeless Shelter and Love Life Ministries.

Membership in the men’s club is simple. It is open to Christian men over 18 who contribute a $10 annual dues fee. Atwood noted that the club has around 140 paid members this year, with 40 to 50 of those men attending regular meetings at the parish.

While the Wild Game Feed is their biggest event of the year, the men get together once a month for some type of social event.

“We meet the first Thursday of each month and each meeting has a theme,” Atwood explained. “We have a wine tasting event hosted by Parallel 44 Winery, a golf outing, a Packer’s night and our annual ‘shrimper’ among other things. What impresses me the most with this group is the friendship and camaraderie among the members.”

According to Atwood, the Wild Game Feed is the best part of being a member of the men’s club. While he is not a hunter himself and thus personally does not give any of the meat for the night, his donation to the evening is in the form of time.

When asked if it was the bison, the venison sausage or the smoked fish that he looked forward to each year, Atwood said, “I like everything, but I’m not so big on the fish.” He said the event receives positive feedback year after year. “The reaction is great. This is truly a guy’s event with an all you can eat lineup, the gun raffles, door prizes, gift cards and of course, cold beer.”