Did Adele Brise belong to a religious community?

(Adele called the Chapel, La Chapelle. The words Notre Dame de bon Secours, priez pour nous — “Our Lady of Good Help, pray for us” — were inscribed above the door of the 1861 chapel. Some translated secours as “health” and called the women the “Sisters of Good Health.) 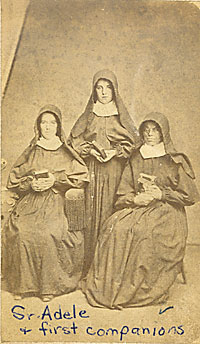 Adele Brise, seated at right, is pictured with two of her early companions. (Courtesy of Diocesan Archives | For The Compass)

In 1867, the women opened a school alongside the chapel. Two years later, they were advertising their boarding school, “St. Mary’s Academy.” They soon had many students, some of whom were orphans.

“Sister” Adele never took vows in a religious community, though some of her companions later did. The final two members of her group — Celina Londo and Cecilia Frisque — joined the Sisters of St. Francis of the Holy Cross at Bay Settlement in 1903.

The Bay Settlement Sisters took responsibility for the chapel and its school in 1902. They did so six years after Adele’s death, at the request of Bishop Sebastian Messmer. They served there until 1992.

“Sr.” Adele and her companions lived as a third order community. Third orders, sometimes called tertiaries, are lay people linked to a specific religious order, such as the Franciscans or Dominicans. When discussing religious communities, those in the “first order” are priests; “second order” are those who are cloistered; and “third order” members live “in the world.”

• Regular members of third orders are vowed religious men and women who belong to religious communities. These are the third order groups we know best. The Sisters of St. Francis of the Holy Cross at Bay Settlement are an example of such a group. (What is sometimes confusing is to realize that all religious brothers, sisters and cloistered nuns are still considered members of the laity, as distinguished from those who are ordained.)

• Secular members of third orders are lay persons who have not taken public vows — like brothers, nuns and sisters do — but who are still associated with a particular religious community. These include those who belong to what is now called the Secular Franciscan Order, which has many members in this area, and the Secular Carmelites. They try to follow, as much as possible, that religious community’s way of life in the secular world under the guidance and inspiration of a religious order. They may or may not live in a community.

Adele and her community resembled both types of third order members, but they did not make public vows while at the chapel.

Modern secular tertiaries do follow specific rules of life, make promises — and some make private vows — and strive to live the Gospel according to their specific calling in the world, just as Adele followed her calling to teach the faith to children.

Modern tertiaries undergo a period of formation, participate in ongoing spiritual development, practice daily prayer, attend Mass on a regular, if not daily, basis and gather in community for days of reflection or retreats. Many are affiliated directly with a religious community; others have separate directors and particular charisms, while still following the basic structure of their founders. The most famous founder of tertiaries was St. Francis of Assisi.

Groups of lay Christians lived in community and followed specific rules of religious life long before St. Francis’s time (1182-1226). For example, the Third Order of the Norbertines dates to 1126. However, the Franciscans’ founder is most often credited with formalizing the practice of secular third orders.

Francis started the Franciscan secular tertiaries in 1221, after many married people were attracted to his community’s way of life. Since their married state made it impossible for these people to join the Franciscan’s first order (priests) or second order (the Poor Clares), Francis developed another Franciscan rule (code of life) — a third order — for them.

Many of the points Francis stressed 800 years ago would still be recognized by a secular Franciscan today: modesty in dress, works of charity, the practice of fasting and praying the Liturgy of the Hours.

Another recent development for laity to similarly share in the work of religious communities are “lay associate” groups. Sometimes this term has been used interchangeably with “tertiary”; however, there are often clear differences in formal structure and requirements, varying by communities. Tertiaries are more formally bound to the rules and way of life of the religious community than lay associates.

Today, the Sisters of St. Francis of the Holy Cross at Bay Settlement, who oversaw Adele’s Chapel until 1992, have a lay associate program.