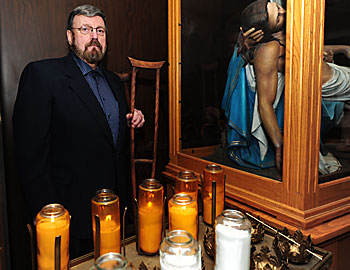 Dan Drossart holds one of the crutches belonging to his uncle, Henry Renquin, who was healed from an injury in the 1940s. (Sam Lucero | The Compass)

According to Drossart, his uncle was injured in a work accident in the 1930s. “He was helping a friend remove an engine from a car,” said Drossart. “It fell on one of his legs. He had multiple breaks in it. It also got infected and it never healed.”

After the accident, Renquin needed crutches to walk but it did not prevent him from visiting the shrine, said Drossart.

“He used to come out here and pray. One time he came out with a friend and while he was here … something happened and he was healed. He left his crutches downstairs, where they are today,” said Drossart. “When it came time to go home, he was so grateful that he was healed, instead of riding back he walked back to Green Bay.”

Renquin’s healing happened when Drossart was a child, but it was a story retold time and time again by his father. Drossart said he continues to visit the shrine, finding comfort in the quiet chapel and crypt, where he often prays.

“I think that Mary helped me a lot,” he said. “I’m very thankful for that. I thank her for the goodness I’ve had in my life.”