“We are delighted to have the service of Jim Marsala and his daughter Stephanie,” said Fr. John Doerfler, rector of the shrine and chancellor of the Green Bay Diocese. “Through their research of the history of the shrine, it is my hope that we can enter more deeply into the mystery of God’s providence as he has worked in the shrine’s history and how he works today in our own personal history to touch our lives with his love.” 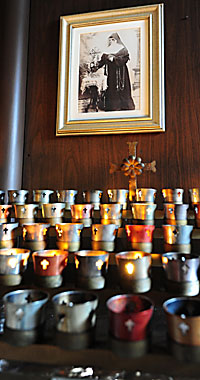 Candles glow in the darkness of the shrine’s crypt below a framed image of Adele Brise. James Marsala and his daughter Stephanie have spent many hours reviewing historical documents in an effort to present the most accurate history of the shrine and Adele Brise. (Sam Lucero | The Compass)

Presenting accurate information from 150 years ago can be a challenge. No better example exists than the spelling of Adele Brise’s last name. Brise is buried in a grave just east of the shrine chapel. Inscribed on the headstone is her name: Adele Brice.

“It’s an ongoing investigation right now,” said Stephanie Marsala. “Even officially (the spelling of Brise is) all over the place. We have records from Belgium that spell it both ways. We have the entry from the parish register (in Bonlez, Belgium) written by the pastor. He spells it Brise.”

Adele was the second of three girls born to Lambert and Marie Catherine Brise. The family left Belgium in June 1855, when Adele was 24.

“We have their travel documents when they left (Belgium) and were issued a family passport, which has names, ages and occupations,” added Marsala. “That’s spelled Brise. If you go to Dion-Le-Val (Belgium), where Adele was born, all the records there say Brice.”

Marsala, whose fluency in French has helped in the examination of documents from Belgium, is motivated by the challenge of resolving conflicting historical accounts. She said it is important to uncover original sources of information rather than rely on second-hand accounts. “Anyone can come along and actually interpret something,” she explained. “To go to the actual documentation, that’s really where you’re going to get a lot of your good resources.”

Thanks to people like Sr. Pauline LaPlante, one of Adele Brise’s followers, historical accounts of Brise’s apparitions and the shrine’s construction have been documented, said Marsala.

“There is a lot of information and scholarship that’s been done on the apparitions and shrine itself, so one of things we are trying to do is give it a little more broad historical context,” she said. “What was the (Brise) family like in Belgium? Where did they come from? How did they get here, because immigration stories are very exciting.”

European immigrants from the 1850s came to the United States on wooden sailing ships, “so making that Atlantic voyage was an adventure,” said Marsala. “It took almost seven weeks to cross the Atlantic on the ship. Then coming to a country where they don’t speak the language and they still have to get from New York to Wisconsin at a time when rails are just starting to get laid. … This is the kind of context that we want to add into the story of the shrine and the Brise family. There was a lot that happened to them before 1859.”

One of the hurdles the Marsalas face in researching the Brise family history has been Belgium’s archives. Two world wars have decimated the country’s historical documents from the 1800s, they said. However, in what her father describes as divine providence, Stephanie said official emigration documents from 1855 were preserved.

“When emigrants left Belgium through Antwerp, they were placed on the Antwerp emigration index,” she said. “What that did was record their vital information … for the Belgian government so they could amend their census. What was miraculous for us is that the only one of these indexes which survived into the 21st century is the one for 1855, the year the Brise family left Belgium. All the rest were destroyed in the two world wars.”

A good example is the U.S. Census documents from the 1800s.

“We found Lambert and Marie Catherine’s census information in 1880 and 1870, but for the longest time we could not find them in the 1860 census. Because they came here in 1855, they should have been on that census,” she said.

Searching a genealogy website, she found information for a family from 1860 whose name was listed as Brauer. “When I investigated further, I looked at the actual picture of the census record, which was handwritten,” she said. “Everything points to the fact that this family is the Brise family.”