Feminine Genius is topic of conference

Hannemann and four other women, who have traveled the world spreading the truth about the Catholic faith and the role of women in the church, gave presentations to a very receptive audience. 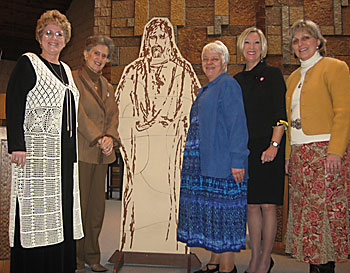 Speakers at a women’s conference at St. Pius X Church in Appleton pose next to a wood cut-out puzzle of Jesus used during the conference. Pictured from left are: Jeannie Hannemann, Mercedes Wilson, Vicki Thorn, Johnnette Benkovic and Judith Leonard.(Amanda Lauer | For The Compass)

The tagline of Feminine Genius is “creating a culture of justice, love and charity” and that message rang clear from the speakers. The opening talk Friday night was given by Johnnette Benkovic, who some call “The Catholic Oprah,” because of her dynamic speaking style.

Benkovic is the founder and president of “Living His Life Abundantly International, Inc.,” a Catholic evangelization apostolate with outreach in television, radio, print and Web communications. She is the founder of Women of Grace and executive producer of “The Abundant Life,” a program televised on EWTN that discusses contemporary issues from a Catholic perspective.

“The salvation of the world depends on you,” said Benkovic. “As women, God desires that we live out the fullness of our authentic femininity so that we can be those women of grace in our day and time, imaging our Blessed Lady that leads this nation, this culture, our children, our families back to truth.”

Following Benkovic’s talk was a panel discussion with all the speakers. There was reflection about the sadness caused by the destruction of children’s innocence in society today. The distinct roles of men and women in the church were discussed. It was noted that while men can be priests, they cannot have babies. That is the call of women in the church.

Benkovic spoke Saturday morning on the topic of following in the footsteps of Mary. Several of her quotes provided food for thought for the audience.

• “Our internal mayhem is caused by our own sin.”

• “God does not cause evil, evil is the lack of goodness.”

• “You have to bring your will into submission to your faith.”

• “We need to catechize our children.”

The next speaker was Mercedes Wilson, a native of Guatemala, who is the founder and president of the Family of the Americas Foundation. She was a friend of Pope John Paul II and Blessed Mother Teresa. Wilson has been teaching and promoting the ovulation method of natural family planning worldwide since 1968. Her foundation is dedicated to defending the rights of the family in a secular world, particularly training instructors in the ovulation method of NFP and in the formation of parents to remain as the primary educators of their children in matters of human sexuality.

Wilson’s talk was titled “The Root of the Problem,” which she summed up in one phrase. “The devil’s gold mine is pornographic sex education.” She quoted Fr. John Hardon: “Abortion kills the life of the child. Sex education kills his eternal soul.”

The world is in a dire state now, according to Wilson. She noted some statistics such as more than 1 billion babies have lost their lives since 1973 between induced abortions and chemical abortions brought about by artificial birth control. Twenty-six percent of girls in the United States between the ages of 14 and 19 are infected with at least one STD.

Wilson had a message for women to take home. “The mother is the heart of the family, as Mother Teresa said. The biggest job we have as women is to form the consciences of our children by teaching them the virtue of purity, chastity, self-control and modesty. The most important thing in this world is to save the souls of our spouses, our children and ourselves.”

“Joy is the Sign of the Presence of the Holy Spirit,” a quote attributed to Mother Teresa, was the topic of Judith Leonard’s addresss. The director of Family Life and Natural Family Planning for the Diocese of Wichita, Kan., she talked about the successful NFP ad campaign launched in the Wichita area.

The last presentation was given by Vicki Thorn, founder of Project Rachel, the post-abortion ministry of the Catholic Church that began in the Archdiocese of Milwaukee. Thorn discussed Mary’s untraditional pregnancy, women’s physiology, what makes women different from men and what attracts women and men to each other.

Mary Dickhut, a member of St. Mary Parish in Greenville, organized the conference with Jody Lueck. Like other attendees, Dickhut believes a Pandora’s box has been opened after hearing some of the facts reported by the speakers.

“We are reaping the harvest of falling away from God,” said Dickhut. “But there is a sense of hope because all is not lost. But it falls to the rest of us … to be brave enough to stand up and speak the truth.”