His feat relies on his feet

Since his arrival in Green Bay some 16 years ago, the 53-year-old native of Jalisco, Mexico, has made an annual summer pilgrimage starting from the St. Willebrord area and ending at the shrine. 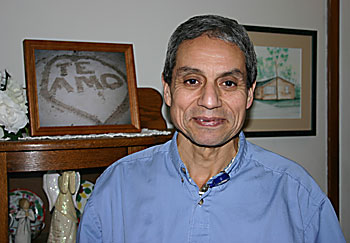 Gallegos remembers well the day a friend introduced him to Our Lady of Good Help shortly after settling in Green Bay.

“We went out to the shrine in his car and I was quite impressed,” explained Gallegos. “When I told my friend that my next visit would be a walking one from Green Bay he told me I would be doing it alone.”

Gallegos explained it was his mother that passed on the Catholic faith to him and his 11 brothers and sisters. In particular, she inspired in him his love for the Blessed Mother under the title of Our Lady of Guadalupe. He added that in Mexico it’s a tradition to make a pilgrimage to a sacred spot or to a place of great devotion for a particular intention or petition.

In a visit home years ago to see his family, Gallegos said that when he told his mother about the Shrine of Our Lady of Good Help, she was quite interested in hearing the story of the apparition. In fact, the prayer card that he gave her still has a prominent spot on the family’s dining room hutch.

As to when he does his annual hike out to the shrine, Gallegos said that he picks a good day to walk, usually in July. He sets out early in the morning before the sun rises and arrives at the church four hours or so later. He plans ahead and arranges to have a friend pick him up and bring him back to Green Bay.

“To walk is my sacrifice to offer to the Virgin Mary,” he noted. “Yet the tiredness that I feel upon arriving at her shrine quickly goes away. I know that our Lady’s presence is there and I am confident that she hears my prayers and intercedes for me.”

One of his petitions over the years had been for the health of his aging parents. In a special way he prayed that if his parents died he would be able to return home to Mexico and see them before they were buried. According to Gallegos, the Blessed Mother has answered his prayer.

“I was there when my father died,” Gallegos explained. “While I wasn’t there when my mother died, I was able to get home in time for the funeral. It was a real blessing.”

While he said that there is an open invitation for anyone to join him on his annual pilgrimage he has only been joined by others one year. Last July he was hoping that his fiancé, Mary, would accompany him. However, she slept in but took up the offer to pick him up later that morning.

“I arrived at the shrine just as he was about 50 feet from entering the chapel. I timed that one pretty well,” said Mary. “He walked right into the basement or the crypt of the shrine and knelt and prayed a whole rosary without sitting down. It amazed me.”

The couple were long-time friends while they worked at Bellin Hospital. But it was just a few years ago that Mary learned about Roberto’s annual walk.

“Maybe it was three years ago when he said to me, ‘I go for a walk in the summer.’ And I was thinking he took a long walk in the park. When I found out what he actually meant and got to actually (witness) it this past summer it was amazing,” Mary said.

Both are regulars at St. Willebrord’s Saturday evening Mass, where Roberto sings in the choir.

The two are looking forward to an April trip to Roberto’s hometown of Cuquio, Jalisco, where they will be married in the church. Both agree that it is their faith that brought them together.

“He has an incredible faith,” said Mary. “My relatives told me that I had a deep faith; that was until they met Roberto.”

“What I like about her is she has a lot of faith too,” added Roberto. “It’s something special.”