VATICAN CITY — When the bishop of Green Bay, Wis., recently recognized a series of Marian apparitions from 1859, it marked the first time apparitions in the United States received official approval.

That’s quite an achievement considering that more than 1,500 visions of Mary have been reported around the world, but in the past century only nine cases have received official church approval as being “worthy of belief,” said an expert in Marian apparitions.

The church has made very few judgments on apparition claims. “It’s not always possible to ascertain if they are true or false because the phenomenon is much bigger than us,” said Marianist Fr. Salvatore Perrella, assistant dean at the Pontifical Theological Faculty Marianum and a theologian who also serves as an expert for the Congregation for the Doctrine of the Faith. 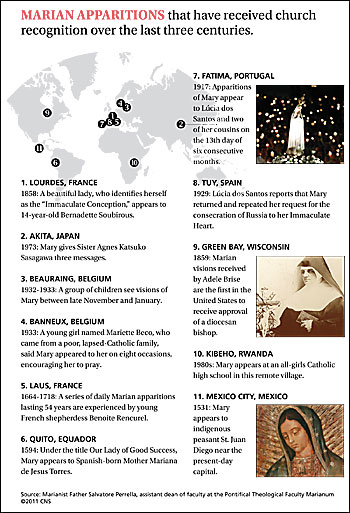 The enormous job of determining the veracity of an apparition falls to the local bishop, said Fr. Perrella.

To help with that task, the Vatican’s doctrinal congregation established a set of norms in 1978 to guide the process of discernment and the investigation of reported apparitions and revelations.

The process “is never brief,” said Fr. Perrella. For example, the Green Bay apparitions received approval 151 years after the first apparition was reported, but that’s just half of the nearly 300 years it took the church to approve the apparitions of Our Lady of Laus in France, he said.

The process is lengthy because visionaries and witnesses must be questioned and “the fruits of the apparitions, such as conversions, miracles and healings” must be examined, he said.

The local bishop sets up a commission of experts, including theologians, canonists, psychologists and doctors, to help him.

According to the norms, the bishop and his commission “must determine the veracity of the facts and the mental, moral and spiritual wholesomeness and seriousness of the visionary and his or her testimony,” he said.

Fr. Perrella said that when the bishop’s investigation is complete, he can come to one of three conclusions: he can determine the apparition to be true and worthy of belief; he can say it is not true, which leaves open the possibility for an appeal; or he can say that at the moment he doesn’t know and needs more help.

In the last scenario, the investigation is brought to the country’s bishops’ conference, Fr. Perrella said. If the body of bishops cannot come to a conclusion, then the matter is turned over to the pope who delegates the doctrinal congregation to step in and either give advice, send a commissioner and-or set up a commission to investigate.

At every step of the investigation, “the person in charge of everything is the bishop,” he said.

The alleged apparitions at Medjugorje in Bosnia-Herzegovina are an example of a situation in which the country’s bishops requested the Congregation for the Doctrine of the Faith to intervene.

The congregation established an international commission in 2010 to investigate the claims of six young people who said Mary appeared to them daily beginning in 1981.

The apparitions apparently are continuing and thousands of people travel to the small town each month to meet the alleged seers and to pray.

Fr. Perrella, who is a member of the Vatican commission to study the alleged Medjugorje apparitions, told CNS the work is only just beginning.

“The pope wants a decisive conclusion made,” he said, adding that it will be a very long process.

The case under study “is a serious thing” that is “very complex” though not impossible to resolve, he said. For the past 30 years, people have claimed to see apparitions of Mary at Medjugorje.

Such an extended duration of alleged apparitions in one place is no longer “something that generates suspicion,” he said. That’s because there are similar precedents such as the apparitions of Our Lady of Laus, which lasted 54 years and received formal church recognition in 2008.

The church approaches each claim “with the maximum prudence, investigative rigor and an invitation to live out the Gospel rather than follow the apparitions,” he said.

In fact, the church never requires the faithful to believe in the Marian apparitions, not even those recognized by the church, he said.

The Catholic Church affirms that Mary was assumed, body and soul, into heaven and that she, like Christ, defeated death and triumphs in heavenly glory with the totality of her being.

For that reason, Fr. Perrella said, Mary can appear in bodily form while the saints or other deceased can’t.

“Mary never comes on her own accord; she is ‘God’s ambassador'” charged with a specific message for a specific time and place, he said.

While the apparitions and messages are never the same, in general, Mary appeals for people’s conversion and seeks to assure men and women that they can depend on God’s loving mercy, he said.