Lourdes and Champion: The similarities 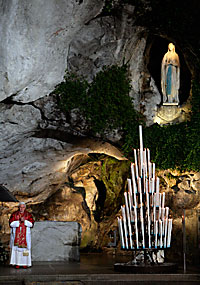 Pope Benedict XVI prays at the Grotto of the Apparitions at the Marian sanctuaries of Lourdes, France. Mary appeared to St. Bernadette Soubirous at Lourdes in 1858. (CNS photo | Philippe Noisette, Catholic Press Photo)

There are several notable similarities to the more well known apparitions at Lourdes, France, to St. Bernadette Soubirous, besides simply the timing. (Lourdes: 1858; Champion: 1859).

• In both cases, the apparitions were to a woman who had struggled with physical infirmities: Bernadette suffered from asthma; Adele lost an eye in an accident.

• In both cases the woman was at the time outdoors, in the midst of carrying out taxing physical chores. Bernadette looking for firewood for her family; Adele Brise carrying wheat to a mill.

• In both cases the women were poor but pious Catholics.

• In both cases the woman was most likely seen as on the margins of society. Bernadette’s indigent family was living in a converted jail cell; Adele was a part of a poor immigrant population.

• In both cases the local pastor asked for an identification from the vision. Bernadette’s pastor, Abbe Peyramale asks; Brise’s pastor asks as well.

• In both cases the identification given was concise. Lourdes: “I am the Immaculate Conception”; Champion: “I am the Queen of Heaven.”

• In both cases Mary asks for prayers for sinners.

• In both cases the visionary later became associated with a religious order. Bernadette enters the Sisters of Nevers; Adele a group of Third Order Franciscans. 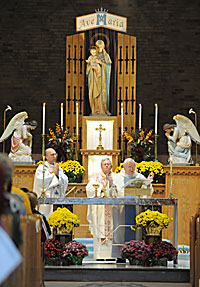 • In both cases a chapel is built on the spot of the apparitions, which alters the original appearance of the site. In Lourdes the Grotto is paved over and the course of the nearby Gave River is changed; in Champion, the trees in which the Virgin appeared are felled to make room for the chapel.

• And in both cases the chapels later receive many visitors and miracles become associated with pilgrimages to the shrine.