Fr. Baraniak, now in his 14th year with the team, has enjoyed an up-close view throughout the regular season and the playoff run. When the Packers play on the road, he watches the action from the visiting owner’s box before making his way onto the field for the fourth quarter. In addition to his ministerial duties, he assists in the locker room. Fr. Baraniak, pastor at St. Norbert College Parish in De Pere, is responsible for returning players’ valuables from safekeeping after the game. The job was tougher this season with all the injuries. 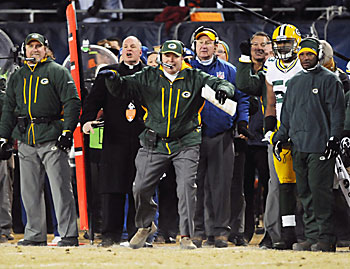 “Even at the end of the season, I had a hard time with all the new faces,” he said. “Usually, after the preseason, by the first game, I know everyone. It was a guessing game at times this year. At the college, at the prison, in all the apostolates of which I’m involved, I take pride in getting to know people’s names, so it’s been difficult.”

Fr. Baraniak, who also serves as sacramental minister at Green Bay Correctional Institution, credits Coach Mike McCarthy for keeping the team playing at a high level despite 16 players on injured reserve. His praise for the Packers’ leader, a Greenfield, Pa., native, extends beyond football.

“Coach McCarthy is one of the most decent people I know,” said Fr. Baraniak. “He has never forgotten where he came from. He treats people with decency and respect. He is not afraid to be a real man with his players, whether he’s talking X’s and O’s or his Irish Catholic faith.”

The pre-game Mass in Philadelphia on wildcard weekend featured a light moment with the coach. In celebrating the feast of Baptism of the Lord, a sprinkling rite was a part of the Mass.

“Whoever is first gets nailed and the priest gets the backlash,” said Fr. Baraniak. “Coach McCarthy always sits on the right side in the front seat. He was wearing a very nice suit and really got it. The entire congregation broke into laughter.”

The combination of the ice water, blessed before Mass, and the head coach as the prime recipient, prompted Ted Thompson, Packers general manager, to say, “Fr. Jim is really taking this playoff stuff seriously.”

Fr. Baraniak is taking a new approach to his Super Bowl homily. He said that he feels some pressure to deliver, so he’s seeking assistance. He has asked for suggestions through “You Make the Call” on his blog at http://baraniak.blogspot.com. He will read all the submissions and highlight portions to include in his homily.

“I want to challenge and affirm them, but it’s based on the readings of the day, so people need to keep them in mind,” said Fr. Baraniak. “Every Mass I have for the Packers is a celebration of the same readings everyone hears on Sunday. Their lives are parallel to the people in the pews. They have worries and anxieties, great hopes and dreams. How do the readings relate to their lives?”

The readings for the Fifth Sunday in Ordinary Time are a good fit for Super Bowl Sunday, he added. “Christ was calling the apostles,” he said. “We at the Packer Mass know each other by name. There is such a spirit, such a prayerfulness at the Mass. These are beautiful reflections, beautiful readings for the day.”

“I was reading Sports Illustrated, the football preview issue, and it was predicted that the Packers and Steelers would make it and the Steelers would win a close game,” he told The Compass in a telephone interview. “Both teams have dealt with some issues during the season. The Packers had several injuries. All the negative attention about Roethlisberger surrounded the Steelers. I didn’t know if it was going to happen, but I was rooting for it.”

Bishop David Ricken and Bishop Zubik have agreed on a charitable Super Bowl wager. The bishop from the losing team will make a cash donation from his personal funds to Catholic Charities of the winning diocese.

Bishop Zubik added that, even if the Steelers don’t become Super Bowl champions, it is still a win for him because his other favorite team will take home the Lombardi Trophy. He sees similarities in both communities.

“Both teams have fans that are very loyal and who know how to have a good time,” he said. “Both cities have people of faith. I will never forget the wonderful people of Green Bay and northeast Wisconsin, so I’m thrilled.”

The Pittsburgh bishop believes that a number of people in his diocese will be rooting for the Packers on Sunday. He points to the people of Mike McCarthy’s hometown.

“He is well respected here,” said Bishop Zubik. “It’s inspiring how loyal he has been. He has contributed a significant amount of money to St. Rosalia (Academy), the school he attended.”

McCarthy was named a St. Rosalia distinguished graduate in 2007. An autographed photo and letter from the Packers’ coach is on display in the school’s entryway. McCarthy also attended a Catholic high school, Bishop Boyle in Homestead, Pa., which closed in 1986 due to declining enrollment because of layoffs in the steel industry. St. Rosalia Academy held gold day on Tuesday, Feb. 1. Students could choose the gold of the Steelers or Packers.

“Blood is thicker than water, so I see a lot of support for the Packers,” said Bishop Zubik.

If the Packers lose, Kunkel, a member of the Packers’ board of directors, will send Br. Hipps some Wisconsin cheese and sausage and a copy of the 2010 book, “A Championship Team: The Packers and St. Norbert College in the Lombardi Years.”

If he wins, Kunkel will receive a bag of flour and a loaf of bread from St. Vincent College’s grist mill, a special “black and gold blend” of coffee and a copy of a book about the Steelers.