Ark of the Covenant has since evolved into People of Praise, they said. 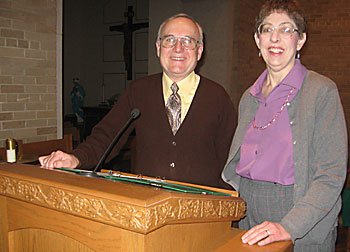 Michael and Ruth Schmelzer (Amanda Lauer | For The Compass)

“It’s an ecumenical charismatic Christian community,” explained Michael. “There are 21 groups around the country, one in Canada and three in the Caribbean. In the mid 1980s there were prayer groups all over the world and when some of these groups matured they became Christian communities. The difference between a prayer group and a community is the covenant with one another that we will live our lives as well as we can in common, encouraging each other in holiness and giving common witness to the Lordship of Jesus and to the gifts of the Holy Spirit.”

Ruth is the head of a women’s group with People of Praise. A few years ago the couple did a service trip with the group in Shreveport, La. As part of their volunteer work with the group, Michael and Ruth purchased a van to transport one of the members of the group, who is in a wheelchair, to meetings and various other events.

Michael and Ruth weren’t acquainted until they settled in the Fox Cities to pursue their careers. Michael earned his master’s degree in chemistry and took a position with American Can in Neenah. Ruth moved to Kimberly in 1973 to take a religious education job at Holy Name of Jesus Parish (now Holy Spirit).

“We met each other at the Ark of the Covenant meetings. We were friends for six or seven years before we looked twice at each other,” recalled Ruth with a laugh. The couple were married in 1982.

There are several areas to which Michael and Ruth devote the bulk of their volunteer time, but when asked what was most meaningful to them, they replied in unison, music. Ruth leads YouthSong, the children’s choir at Sacred Heart Parish, and she also plays percussion for Masses during the Christmas season and Holy Week. Both Michael and Ruth are in the parish’s Hearts of Praise Choir. “It’s a real joy to praise the Lord through music,” noted Michael, who also enjoys being a lector.

Through the years the Schmelzers took in a half dozen foster children. They ended up adopting two of the children, their son Bob, who is now 27, and daughter Sarah, 24. Ruth took on the role of full-time mother when the children came into their lives.

The couple has two children they are supporting through Christian Foundation for Children and Aging. But with their own children grown, Ruth has more time to devote to Elizabeth Ministries, an international movement offering encouragement, hope and healing on issues related to childbearing, sexuality and relationships. Currently she is in the process of organizing the two libraries at the home office in Kaukauna. She’s also working on a newsletter to send to the 700 chapters around the world.

Everyone should consider volunteering for something. “If you have time there are lots of needs. There are so many needs that can be filled and many of them can be volunteer services,” said Ruth.

“The main challenge is to be volunteering in a way that gives glory to Christ — discerning what is of interest to him, not just what looks interesting to you,” added Michael.