Why are the Marians pulling for the Packers?

Here’s a better suggestion: Call him into a huddle and say, “Here’s $100,000 toward feeding the poorest of the poor.” He’d smack his hands together, line up, and go deep — executing a perfect reception in the name of the Immaculate Conception. 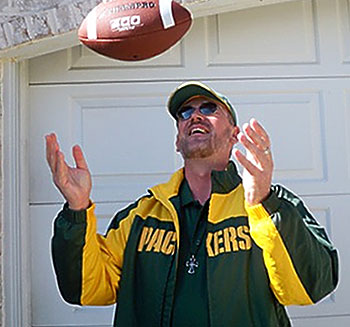 Fr. Leszek Czelusniak, a Marianist missionary priest serving in Rwanda, is backing the Packers in the Super Bowl. The team has provided support to the priest’s mission in Kibeho, Rwanda.(Courtesy of Marian of the Immaculate Conception | For The Compass)

In short, Fr. Czelusniak, a member of the Congregation of Marians of the Immaculate Conception, is pulling for the Green Bay Packers to win the Super Bowl on Feb. 6.

In a series of generous contributions to a series of merciful initiatives led by Fr. Leszek, the Green Bay Packers football team and head coach Mike McCarthy partnered in August to make a $100,000 donation to train Rwandans in bread baking and small-business skills, a project begun with the friendship of Fr. Leszek and Ron Schoenfeld, founder of the Seven Loaves Project, a non-profit organization headquartered in Green Bay.

The initiative “is very inspiring, and its mission will help many people by providing enduring skills,” said McCarthy.

The flagship bakery will be built at CANA Marian Formation Center in Kibeho, Rwanda. The bakery will serve the duel purpose of providing bread as well as Communion hosts for the region.

The bakery isn’t the only cause for celebration for the Marians’ Rwandan mission.

Five hundred children can now call themselves full-time schoolchildren, the future hope for Rwanda where genocide in 1994 left 1 million dead and many more wounded and displaced.

Packers’ outside linebacker Brady Poppinga and his wife, Brooke, were the first from the Packers organization to make a donation. Although the Poppingas are not Catholic, they donated the funds to build the bathroom for the school. The Poppingas generously support educational initiatives in developing nations around the world.

The children lined up outside their new brick building in the village of Kibeho on opening day last August. Looking on with a huge grin was Fr. Leszek, who spearheaded the school project and many other initiatives to bring basic necessities — bread, water, education and faith — to the people of this central African nation.

One genocide survivor refers to him as “an angel sent to Kibeho,” but Fr. Leszek — equally bashful and resolute — steers all praise to God.

The new school, which the Marians have turned over to the local diocese, is named for Blessed Stanislaus Papczynski, the 17th century Polish firebrand who founded the Marian Congregation. Providing education has been a main ministry since the Congregation’s earliest days. 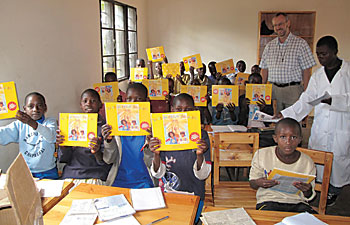 Fr. Leszek Czelusniak is pictured with school children at Blessed Stanislaus Papczynski School in Kibeho, Rwanda. The Green Bay Packers and head coach Mike McCarthy made a $100,000 donation to train Rwandans in bread baking and small-business skills, an effort begun by the Green Bay-based Seven Loaves Project. (Courtesy of Marian of the Immaculate Conception | For The Compass)

“The school makes sense to people in Kibeho in every way. It is faith and love in action,” said Immaculee Ilibagiza, an author, speaker and Rwandan genocide survivor. Fr. Leszek and Immaculee have traveled the United States and abroad to draw attention to needs in Rwanda and the spiritual significance of Kibeho, which they hope becomes the “Lourdes of Africa.”

The Green Bay Packers’ donation came about after the NFL organization learned of Schoenfeld’s humanitarian trip to Rwanda in 2009. During that trip, the restaurateur prepared a meal for 4,000 villagers and took a tour of the Marians’ CANA center where Fr. Leszek told him that villagers receive bread only about once a year, or not at all.

Schoenfeld formed the Seven Loaves Project vowing to create wood-fired bread ovens — in other words, ovens that wouldn’t require electricity — to produce naturally leavened products using local grains. The focus will include development of small-business and vocational skills for Rwandans.

“I think the bakery, the school, these things are really just the will of God,” Fr. Leszek says. “And through the prayer and gifts of good Christian people who help us, this is becoming a reality. But it’s really through the prayers.”

The Packers play the Pittsburgh Steelers in the Super Bowl on Feb. 6. Go Packers. Go Rwanda. Go Fr. Leszek, one of God’s MVPs on the front line of mercy.

Editor’s note: This story is reprinted with permission from the Marians of the Immaculate Conception. Read the entire version of this story at this link.