“A lot of people, when they go out there, are buying five or six at a time,” said Cross, 24, the film’s director and producer. “People are giving it to their friends, those who have had hardships in their lives.” 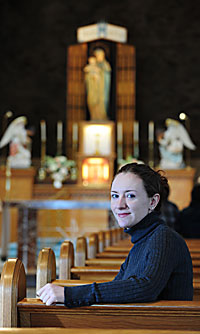 Ashley Cross, creator of a documentary on the Shrine of Our Lady of Good Help, says the project was a spiritual journey. She is planning a career in filmmaking and the shrine documentary was her first endeavor. (Sam Lucero | The Compass)

Stocking the DVD will likely become more challenging as large numbers of pilgrims are expected to make their way to Champion in response to the approval of the Marian apparitions by Bishop David Ricken. Cross said that, while she anticipated the declaration of the apparitions when she began making the film in 2009, it was not her motivation for the project.

“My whole goal was to spread the word about the shrine,” she said. “I just wanted to tell the story and inform people in the most compelling way possible.

“It’s a resource,” she added. “I look at it as taking the history book and making a movie.”

Brise reported that the Virgin Mary appeared to her on Oct. 9, 1859. In the last of three visions, she was instructed to gather the children to teach them religion.

“The message is as needed today as it was more than 150 years ago,” said Cross. “Educating the children, especially in this day and age, is so crucial. We are tested every day and if we don’t have our faith to back us up, it’s going to create problems in our lives.”

The documentary is suited for viewers of all ages. Cross said that the 30-minute length is helpful for younger audiences.

“We live in a visual world,” she said. “People’s attention spans are very short, especially children. I wanted to make it so it was interesting and would get to the point right away.”

Cross combined still photos, reenactments, interviews and footage from the shrine’s 2009 feast of the Assumption celebration on the DVD. Bishop Ricken’s announcement, declaring the apparitions worthy of belief, is also now included. EWTN has showed interest in airing the documentary. Cross hopes to see it on the network by year’s end.

Making the documentary was a spiritual journey, said Cross. The project, her first film, had its share of highs and lows, but she felt guidance in seeing it to completion.

“I felt that somebody was watching over me and that someone was with me,” she said. “All along, I felt that this was the Blessed Mother’s production and that she wanted to see it through and make sure that things went right.”

A week after the film’s premiere in March of 2010, Cross traveled to Florida to show the finished product to her father, John Cross.

“He cried after seeing it. My dad really introduced this place to me and he was the one who really grounded me in my Catholic faith,” she said. “I give him all the credit. If it wasn’t for him, I wouldn’t have ever known about it. He really instilled that passion in me.”

Cross continues to serve the shrine as a volunteer. She tries to attend most special events to share the history with visitors and serve as a tour guide.

“I was just out there the other day,” she said. “There is great anticipation that it is going to be very busy this summer, especially for Aug. 15 (feast of the Assumption) and for the Fatima Days (13th day of each month, May through October). I hope the documentary enhances the experiences of those who have been touched by the shrine.”

Cross is currently writing a script for her next film project. While she is not ready to release any details, she did indicate that the storyline has a connection to the shrine. Moving forward as a filmmaker, she draws inspiration from the faith commitment displayed by Brise.

“I want to take the role of the humble servant that Adele was,” she said. “I feel that we are all born with special talents and gifts and we have to use them to serve Our Lord the best way that we can. Mine is hopefully making films. That’s the role I want to take in the most humble way possible, being obedient to God, living his word and spreading Christ’s message.”

Cross has no idea how many copies of the DVD have sold to date, but her modest expectations were surpassed a long time ago.

“It’s been unbelievable,” she said. “As someone who made her first film, I thought I would sell 100 copies. A volunteer told me that they’ve been selling like hot cakes. It’s such an honor to be a part of the shrine story.”